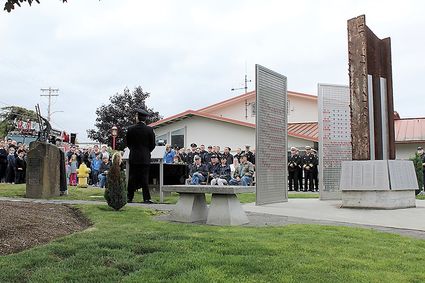 Like just about all public events in 2020, Edmonds' annual marking of the Sept. 11 terrorist attack will look different this year due to the coronavirus pandemic.

Details could be coming later next week, but South County Fire spokesperson Leslie Hynes said there would be no in-person ceremony.

"We are talking about trying to do a virtual/video ceremony, but haven't pinned it down yet," she said.

The event, each year led by South County Fire & Rescue firefighters, honors those lost on Sept. 11. The International Association of Fire Firefighters Local 1828 hosts the event.

In addition to a bugler, there have been speeches and a moment of silence.

The event is normally held at the Fallen Firefighter Memorial Park at Station 17, 275 Sixth Ave. N – dedicated on Sept. 11, 2015 – has been led by South County firefighter Dave "Bronco" Erickson.

The park features a memorial to the victims built around a 1-ton beam recovered from the collapsed World Trade Center. The beam, obtained by Snohomish County Fire District 1 (now South County Fire) in 2011, is supported by two stainless steel towers that sit above a pentagonal foundation.

Four small trees surround the memorial, and pay tribute to the four airplanes lost in the attack.