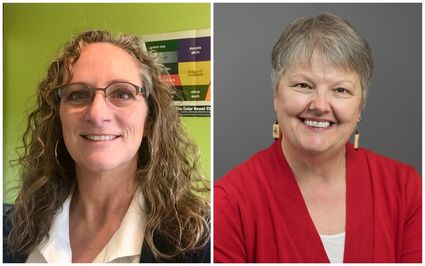 The book is part of the Azar-Hagen Grammar Series, which is used to teach English around the world. Voetmann wrote the teacher's guide and Weibel wrote the tests and quizzes to accompany the textbook.

Voetmann earned her Teachers of English to Speakers of Other Languages (TESOL) certification at Edmonds College and her master's in education at the University of Washington.

She taught in China and Japan and has been an instructor at Edmonds College for 18 years. She also served as an editor for the third and fourth editions of all three student books in the Azar-Hagen series, as well as the ancillary materials.

Weibel earned a master's degree in TESOL at the University of Washington. She taught in Austria and Yugoslavia and has been an instructor at Edmonds College for 32 years. She has written testing materials to accompany the Azar/Hagen Grammar Series for 11 years.

Both Voetmann and Weibel use the textbook and supplemental materials in their classrooms, and say student feedback influenced the new edition.

"Our students partially wrote this book," said Voetmann. "Their voices are in this book."

The textbook's coauthor, Stacy Hagen, was one of the founding members of the college's Intensive English Program, which started in 1981.