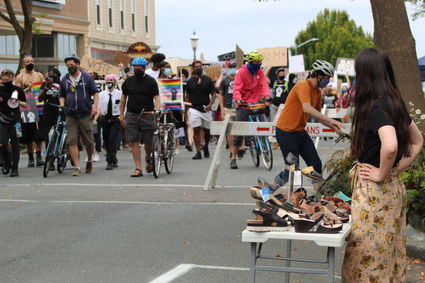 A Black Lives Matter rally and march through Edmonds on Saturday, Aug. 29, was briefly interrupted by pushing and shoving near the Edmonds Historical Museum.

According to a witness, whose identity the Beacon confirmed, a couple possibly in their 60s pushed participants aside "because they said that people were standing in the way of where they wanted to walk."

"The protest was inspiring until the end, when a white couple walked through without masks and started to push people," said the witness, who said the couple was antagonistic. "Police showed up, but it all remained calm. A Trump truck was driving around. "

Said Edmonds Police Sgt. Josh McClure: "Our officers did respond to a situation ... Our officers displayed teamwork and an empathetic approach that was perfect in a somewhat tense situation that emerged near the conclusion of the event."

McClure said he did not have any other specifics, other than that there were no arrests.

The march, which included about 250 participants, began at Brackett's Landing North, traveled up Main Street, and continued to Civic Park. Participants then gathered in front of the museum and listened to speakers.