An Edmonds icon tagged – and repaired 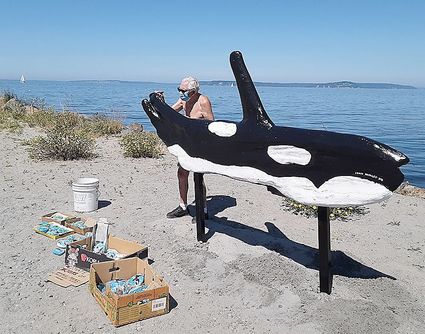 John Hurley, 92, adds some fresh paint to his orca. In the photo is a handwritten note he has in front of his small painted rocks. It reads, "25 years," with the 25 crossed out and 26 added.

John Hurley did what he always does when his iconic orca sculpture needs touching up.

He booked it to the jetty at Brackett's Landing North for repairs.

But this touch-up was different. In an ugly display of arrogant vandalism, Hurley's beloved orca had been defaced with graffiti.

Meh. Hurley, 92, stripped to his waist on Aug. 14, spread his tools by the jetty walkway, and brushed on fresh paint. This after a City worker had scraped off the graffiti.

"The City called John and let him know it had been tagged," said Nancy Hurley-Madison, John's daughter. "They also went about repairing it whe...