Also: The story of Edmonds WWI veterans who succumbed to the Spanish flu 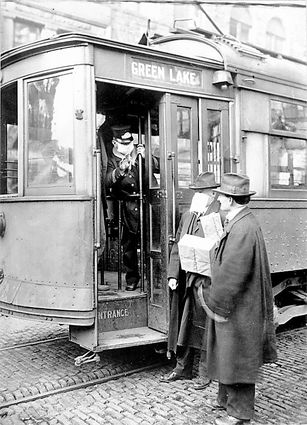 Even back then: In late 1918, a streetcar conductor on the Green Lake run in Seattle informs a potential rider that he can't board the streetcar without wearing a face mask.

Editor's note: 102 years ago, the world experienced another worldwide flu pandemic. Among the casualties were three Edmonds soldiers.

In October 1918, the world was still fighting WWI, and although the end of the hostilities was near, censorship of the news still remained. Therefore, it was left to the non-combatant Spain to report that civilians in many places were becoming ill and dying at an alarming rate.

These circumstances gave rise to the name by which this horrible disease would forever be known – the Spanish flu.

In late 1918, a streetcar conductor on the Green Lake run in Seattle (see photo) is informing a potential rider that he cannot board the streetcar without wearing a face mask. Doesn't that sound familiar?

After first showing up earlier in 1918, and then seemingly abating, in the fall, the misnamed Spanish flu returned with a vengeance, and Seattle was enforcing regulations to protect its citizens.

The only public gatherings allowed were those in the open air. Sound familiar?

In the United States, the disease, first thought to be a three-day fever, was identified among military personnel in spring 1918. Most people recovered after a few days, and only a few deaths were reported.

However, in October, with WWI winding down and American doughboys trickling back home from Europe, the disease resurfaced with a vengeance. Some victims died within hours after the first symptoms; others died after a few days.

As the virus spread throughout the populated areas of the United States, and even into remote villages in Alaska, doctors, scientists and health officials seemed helpless. In one small remote native village in Alaska, influenza appeared where there seemed to be little contact from the outside.

It was unknown where this strain of influenza first originated, but it was determined that it was caused by an H1N1 virus with genes of avian origin. And even though it became known as the Spanish flu, it was very doubtful that Spain was the source.

Worldwide, it is estimated that about 500 million people became infected with the virus, and it is thought that at least 50 million, and probably more, died. About 675,000 people died in the U.S.

A Census Bureau report showed that 1,513 people died in Seattle.

Even though Washington state had a large military and naval presence, it had a smaller number of victims than other states, except Oregon. The death toll seemed highest in the most heavily populated areas of Washington, but touched nearly every community.

From late September 1918 through the end of the year, the disease had killed over 5,000 of the state's residents. More than half the victims were between the ages of 20 and 40.

It is difficult to determine how Edmonds, a town of about 1,000 residents, was affected by this pandemic, as the local newspaper appeared unconcerned. Instead, with the Nov. 11, 1918, armistice in the news, the publication mainly covered war information – and the ending of the war was the main focus.

As he recalled the history of Edmonds as seen from the eyes of local journalists, even Ray Cloud, longtime editor of the Edmonds Tribune-Review, in his book "Edmonds, the Gem of Puget Sound" (1953) had no comments about the influenza pandemic.

Under town happenings, the Tribune-Review did mention the influenza deaths of three local people.

The third report was that locally, Jenne Peterson, of Camp 1, Admiralty Logging Company, died Nov. 6 in a Seattle hospital, a victim of the Spanish flu. A few other 1918 deaths were labeled pneumonia – of course, the Spanish flu may have been the contributing factor.

From my own research, I found that three of the four young Edmonds men who lost their lives while serving in WWI had died as a result of the dreaded influenza.

The first young man to lose his life during WWI was 22-year-old Pvt. Jesse G. Marshall. Marshall died December 17, 1917, while serving in the U.S. army on a battlefield "somewhere in France."

He did not die from an enemy's bullet, but rather from influenza. This raises the question: Was he also one of the first to fall victim to what became known as the Spanish flu? Marshall was born in Washington Nov. 5, 1895, the eldest of six children of Frank W. and Sarah Marshall of Edmonds.

From reading answers to questions on his June 1917 draft registration form, Marshall seemed to be an interesting young man. He noted that his home was a camp on an Edmonds beach, and he received mail at the Edmonds post office.

He gave his occupation as a trapper, employed by no one, and employment place as everywhere. The exact location of Marshall's "somewhere in France" grave is unknown. His death was listed as "non-battle," and he is one of the more than 4,400 men still missing from WWI.

Second to die while serving his country was a very popular Edmonds native, 22-year-old Pvt. Victor Hansen, the third son of Edmonds pioneers Louis and Sine Hansen. The Hansens' longtime Edmonds home was located on the north side of George (Main) Street between Sixth and Seventh streets, and son Victor was a very popular figure around town.

He was drafted and sent to Camp Freemont in California in May 1918, attached to Co. B of the 22nd Machine Gun Battalion, U.S. Army. While still stationed at the camp, Hansen became a victim of the Spanish flu and died of pneumonia Oct. 19, 1918.

He is buried at Evergreen-Washelli Memorial Park in Seattle. A former student at Edmonds High School, Hansen was a true Edmonds native, born there Dec. 23, 1895. He lived in Edmonds his entire life before entering the service.

The third to die was another popular young man, Pvt. Richard Bosworth Burbank. He enlisted Oct. 3, 1918, while he attending college in Pullman. He graduated from the Agricultural Department at Washington State College and accepted a position as superintendent of the College Dairy.

He resigned to enter the Officer's Training Corps of the U.S. Army. During the Spanish influenza epidemic at the college, he volunteered to attend the sick. While involved in this service, Burbank was himself infected with the virus, and on Nov. 2, 1918, he died from the disease.

A military escort accompanied the soldier's body back to his hometown, and Burbank was buried in Seattle at Evergreen-Washelli Memorial Park.

A 1914 graduate of Edmonds High School, Burbank was born Oct. 5, 1896, in Minnesota, the son of Mr. and Mrs. David Bosworth Burbank, whose home was on Fourth Street in Edmonds. Ironically, Mrs. Burbank went to Pullman to care for her son during his illness. After his death and funeral, she became ill with what was thought to be a serious case of tonsillitis.

Instead, she had been stricken with influenza and developed pneumonia. She died Dec. 5, 1918, a little more than one month following the death of her son. Mr. Burbank was remembered as a longtime vocational teacher in the Edmonds School District. 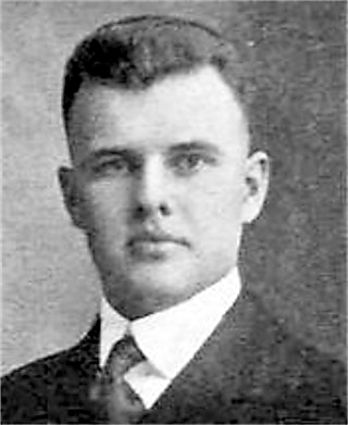 An advertisement showing the Spanish flu as extremely communicable appeared in the Tribune-Review Nov. 1, 1918. Home Stores Co., a downtown Edmonds grocery store, announced: "While the 'flu' is still in our midst, use your telephone. We exercise great care in filling telephone orders, and while under ordinary circumstances we prefer to have our patrons come in and shop personally, at the present time we believe it is everyone's duty to avoid crowds. Phone for Meat, 53 and Groceries, 201."

For such an extremely virulent health issue in 1918, one that involved the whole world, it does seem strange that the importance of the Spanish flu was apparently overlooked or ignored by some people in the small town of Edmonds.

By the summer of 1919, the influenza pandemic came to an end, as those infected either died or developed immunity.

By the time, the pandemic ended, over 6,500 residents of Washington state had died.