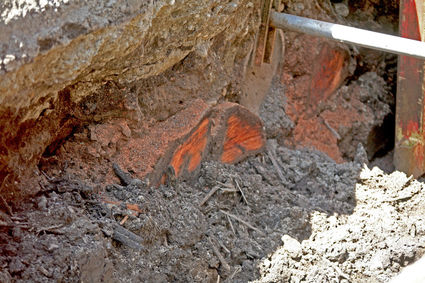 The Beacon is occasionally republishing stories from the past. Here's one from May 2013 on a surprising discovery on 76th Avenue West.

There are some interesting antiquities showing up 5 to 10 feet underground along 76th Avenue West, in Edmonds, where crews are replacing old water and sewer mains.

Crews are finding incredibly well-preserved logs running crossways across the road beneath layers of fill dirt and paving.

“I’d assume this was a low point in a previous grade,” job superintendent Caleb Gott said. “They must have come in and logged this area originally, and built the first road for access.”

Gott figures the first road builders cut trees and laid them sideways as a base in an unstable area.

Gott has measured 22 feet of logs they’ve had to cut through, but has seen more further along the project. There is a mixture, such as cedar, Douglas fir and other kinds typical of a Northwest forest.

“It’s going to be about 60 feet total of the logs when we’re finished here,” he said.

But the surprising part of the find is the quality of the logs. They look pretty much like they would have on the day they were laid.

Gott explained that bacteria cause the wood to break down over time. But when the logs were covered with dirt, there was no air present, so the bacteria couldn’t live.

The sections of logs are being removed only where the trench requires it; the rest will remain in place.

“It’s already an established base,” Gott said. “It would be too expensive to take out, and there’s no real reason to.”

But a question remains, how long have the logs been under the road?

Jim Epting has lived in the neighborhood for more than 32 years, moving there in 1981. He’s surprised at the logs buried underneath the road, but says that there really hasn’t been much repaving or roadwork along that stretch since he’s lived there.

“This is really kind of cool,” Epting said. “This had to be a low part of the valley, and was eventually leveled with fill, asphalt and a couple of resurfaces.”

Epting said the road was completely paved when he moved there.

Rocky Adams has lived in the neighborhood since 1961, and remembers the road before it was completely paved, but doesn’t remember seeing the logs. 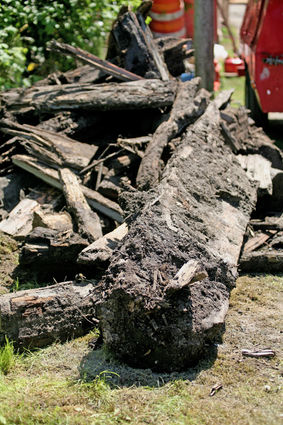 “I remember mostly loose asphalt and gravel, which was then pushed down and oiled,” he said.

But he remembers many washouts on the road, which may give a clue to why the logs were put there in the first place.

“When I was a baby, they lost a backhoe overnight just south of here,” Adams said. “The whole thing just sunk into the ground.

“The whole paving project was shut down for over a year while they did testing. They thought there might be quicksand there.”

So the logs will remain in place, helping to create a stable base in an area that may have more history right under the road than most residents would have guessed.