Underway: A new ship for Sons of Norway 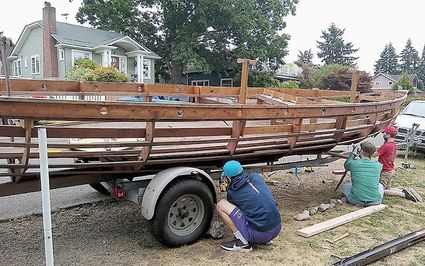 Xander Siqveland, in green shirt, works on his Eagle project – restoring the Son of Norway's "Thor." With him are Joe Sindell, left, and Kyle McBride. The boys are all from BSA Troop 166 in Wedgwood.

"Thor" is being restored.

Work began July 26 with the removal of blackberry vines that had grown over it. On Aug. 1, Siqveland and volunteers from Troop 166 and crew from the Sons of Norway (in masked-up COVID-safe groups of under 10) replaced rotted struts to get the ship ready for a move.

On Aug. 2, the ship was transported from Shoreline, where it was parked, to Edmonds, where Xander's crew sanded and varnished the ship at The Cogworks Creative Ma...