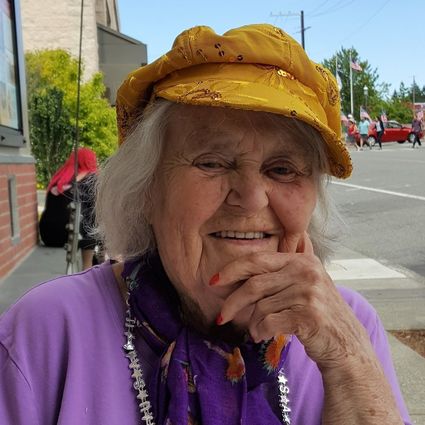 Audrey Mary Hirst passed away peacefully of natural causes on March 28th, 2020, at the age of 95 in Edmonds, WA. Audrey was born in Fleetwood, England, on August 17th, 1924 to Robert and Ethel Daniel. She grew up in England during WWII and served in the Women's Land Army as a young woman to support the war effort.

Audrey discovered her passion for arts and crafts when she was a young girl. During the blackouts of WWII, as the bombs were dropping, she spent hours drawing, painting, writing and creating.

She entered art and writing contests and won many prizes, including a trip to Spain. In 1957 she married Herbert "Bert" Hirst. In 1966 Bert got hired by Boeing in Seattle, WA, and in 1967 they relocated their family to the United States.

Audrey fell in love with Edmonds the minute she came to visit and told Bert that if she was going to live in the United States, it had to be in Edmonds. She loved the small artistic, scenic, and friendly community, and quickly made many friends.

She loved painting pictures of the ferries, Puget Sound and Olympic Mountains. Audrey became a sign painter for several stores and was famous for her freehand large posters and signs that she created for local Edmonds businesses and politicians.

She served on the Edmonds Arts Commission and won prizes in the Edmonds Art Festival. In 1990 Audrey won the contest sponsored by the Edmonds Centennial Committee in conjunction with the Edmonds Post Office for the design of a special cancellation "Postmark."

Her winning pictorial postmark was used on 8-11-1990 by U.S. Postal service employees as part of the festivities. In 2018, she was a "featured artist" at the Edmonds Art Walk.

She is also survived by 5 beautiful and loving great-grandchildren: Esther, Audrey, Quinn, Alison, and Charlee; and her Fur Angel Therapy Dog Tinkabell, that gave her, and her friends in assisted living so much love, laughter, and encouragement over the last few years. They were her reason for living and continuing to paint!

Audrey was a Leo and took her Lion symbol in life very seriously. She was brave, loyal, strong, compassionate, and loving. She is now free and ageless to frolic about as our Guardian Angel and bring passionate protection, guidance, and wisdom to all people that she was so devoted to.

She will be our light and strength moving forward! We celebrated her life at her 90th birthday party, and my family wants to thank all of our friends and family who made that an amazing event.

In lieu of flowers, please make a donation to your favorite charity, love yourself, keep calm, and carry on.