No hate-crime charge in vandalism case 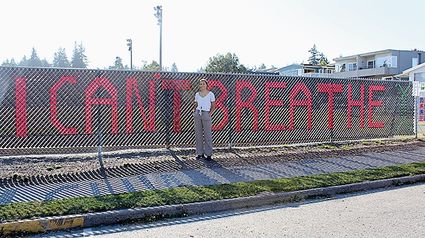 Christabel Jamison repaired the "t" in her artwork by rearranging individual pieces of privacy tape made for chain-link fences.

On July 19, three days after the Snohomish County Prosecutor's Office declined to file a hate crime charge against the man Edmonds Police identified as a suspect in the vandalism of the "I Can't Breathe" artwork, the man in question walked to the Edmonds police station and summoned a police officer.

According to an Edmonds police report, the 69-year-old man, Richard Tuttle, wanted to talk to an officer about the incident, which was referred back to the City of Edmonds' prosecuting office for consideration of a malicious mischief charge.

"I made the front page of the paper," Tuttle told Officer Robert Peck, holding up a copy of the July 16 Edmonds Beacon detailing the repair of the On the Fence artwork in the 200 block of Sixth Avenue North, opposite the police station.

Although Peck told Tuttle that he could not provide any information, the man said his wife was concerned that protestors would show up at his home if his name were known.

The man said he wasn't worried about the situation, but he did call the Beacon to see if the paper was going to publish his name. (The Beacon first published his name in a July 20 edmondsbeacon.com story.)

The man then told Peck he "didn't feel right" that the sign was put up and paid by his tax dollars.

Before he left the police station, Tuttle told Peck, "Between you and me, I did it."

Christabel Jamison, an 18-year-old Edmonds-Woodway High School graduate, created the "I Can't Breathe" artwork with a $500 stipend approved by the Edmonds Arts Commission.

Jamison, of African-American and Norwegian ancestry, told the Beacon she is passionate about Black Lives Matter and wanted to increase visibility of the movement in Edmonds.

On July 14, several witnesses reported to police that a white man wearing a baseball cap, sunglasses, and a face mask used black spray paint to cover the "t" in the "Can't" of "I Can't Breathe."

(Jamison and others later repaired the installation.)

The witnesses gave police the suspect's vehicle license plate. Two officers responded to the registered owner's address in Edmonds to follow up. They identified the suspect and his white Subaru Legacy.

Officers told Tuttle they were inquiring about damage to the art installation. According to the police report, Tuttle asked, "Do you want me to clean the paint off?" Officers provided him with a Constitutional Rights form and asked if he wanted to make a statement. Tuttle declined.

Tuttle told officers he was upset with how police were being treated and upset about the location of the art installation and its proximity to the police station.

Because Tuttle was suspected of damaging the artwork created by Jamison, Edmonds police decided to refer hate-crime charges to the Snohomish County Prosecutor's Office.

Two days after the vandalism, the prosecutor's office released its decision.

"The facts in this case, as established by the investigative record provided to my office by the Edmonds Police Department, and the applicable law, do not support the charge of a hate crime offense," said Snohomish County Prosecutor Adam Cornell in a statement.

"Accordingly, the matter will be declined to the City of Edmonds for consideration of malicious mischief charges, which is supported by both the evidence and the operative legal authority."

Cornell said the underlying conduct that gave rise to the referral was shameful and distasteful. But, he added, his office could not "advance the cause of social and racial justice by furthering an unjust felony prosecution. To do so would be unethical."

He added that, "Prosecutors charge crimes based on provable and credible facts and on the law as given to us by the Legislature."

Chief Criminal Deputy Prosecuting Attorney Matthew Baldock, in referring the case back to the City of Edmonds prosecutor to review, said his office would need sufficient evidence to prove guilt beyond a reasonable doubt.

In addition, he added, the legal threshold for charging an individual with a criminal offense is probable cause. However, the office's standards require it to also consider whether there's a reasonable possibility that it could get a conviction at trial – requiring proof beyond a reasonable doubt – if charges were filed.

Said Baldock: "The insurmountable problem in this case is the lack of evidence that the suspect's actions were motivated by his perception of the victim's race. The assigned detective (Julie Govantes) attempts to address this point in her report by pointing to recent articles in two Edmonds-based news outlets about the art installation, both containing information about the artist – including the fact that she is African American.

"What's lacking in the investigation, however, is any evidence that the suspect saw or read those articles."

Said Cornell: "My office will continue to vigorously prosecute hate crime offenses where there exists sufficient evidence to prove the crime beyond a reasonable doubt.

"And we will continue to advance the cause of social and racial justice while concurrently safeguarding the rule of law to both protect and preserve a more civil society."

Edmonds Mayor Mike Nelson, in a statement, disagreed with the county prosecutor's decision not to file hate charges.

"This is the second time our Edmonds police detectives have thoroughly investigated an incident, found probable cause, and brought forward charges of a hate crime, only to have them rejected by the county prosecutor."

The first was in 2019 when the office declined to bring charges against an employee of Harvey's Tavern, who in 2018 had threatened an African American boy and girl and yelled racial slurs at them.

"Some residents have reached out to me to express their concern that they are starting to see a pattern of the prosecutor not seeking justice for crimes against Black people in Edmonds ...

"This is far more than just a crime – this sends a chilling message to Black people and other people of color in our community that they are not welcome and not safe.

"The prosecutor's office claims there is a 'lack of evidence' that the suspect's actions were motivated by his perceptions of the race of the victim.

"I can't breathe (was) the statement made by a Black man, George Floyd, while he was being brutally murdered by a white police officer. It has been a rallying cry for justice against police brutality of Black people by many concerned citizens nationwide and in our local community.

"The suspect in this case admitted he was frustrated with how the police are being treated.

"It is reasonable to infer by the public display of the artist's race in the summary next to the sign, the widely published news interviews of the artist, and the suspect's actions of spray-painting over the 't' in 'I Can't Breathe,' that he knew exactly what he was doing: that the victim was Black, that this art is meant to shine a light on racism against Black people and police brutality, and knowing this, he chose to destroy it.

"The prosecutors regularly rely on circumstantial evidence to prove their cases. How is this any different?

"The jury decides whether a crime has been committed beyond a reasonable doubt – not the elected prosecutor. Now, a jury will never get to decide whether this was a hate crime.

"The prosecutor denied justice not only for the artist who put her heart, talent and time into this art installation, but for the BIPOC members of our community."

"In the light of day, a vandal defaced an important and politically powerful 'I Can't Breathe' art installation in downtown Edmonds. This installation was created by a local high-school graduate with the support of the City.

"While we are saddened to have to address this wanton destruction, we were also heartened by the outpouring of support from local residents who quickly gathered to repair the artwork. ..."

"As your elected officials in Olympia, we will continue to work with our communities of color to address systemic racism and create long-lasting and sustainable anti-racist solutions – stopping police brutality, creating access and opportunities for people of color, addressing mass incarceration, and investing in underserved communities.

"The solidarity demonstrated by our community in reaction to this racism reinforces the persistence and fortitude we will need to do this work and to continue to say out loud that Black Lives Matter."

Read the story on Christabel Jamison's artwork from the July 16 Edmonds Beacon: https://bit.ly/2C1EurQ.