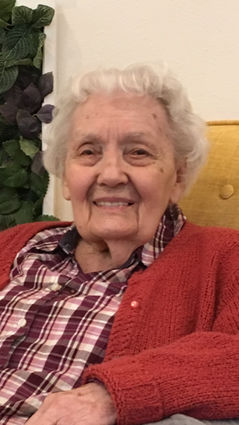 Viola H. Erickson, 102, of Edmonds, passed away July 4 following a long illness. She was preceded in death by Claire (Joe) Erickson, her husband for 40 years, in 2013.

Viola was born on a farm in Nebraska but moved at an early age to the Yakima area, where her folks were orchardists for many years. She is a graduate of Selah High School, Yakima Valley Junior College and the University of Washington (in 1940), where she was an education major.

She married Melvin R. Johnson, a young Seattle banker, later that year and eventually became an elementary school teacher. She taught in Woodinville and Moses Lake before teaching at the former Sunset School in Shoreline. She was widowed in 1967 and married Joe, the school district's painting superintendent, five years later.

For most of her life, Viola was an accomplished pianist. Among other interests were a lifelong love of horses and, since an early retirement 45 years ago, traveling domestically (to all 50 states) and Europe. She and Joe at various times lived in California, East Wenatchee, Leavenworth and Tacoma, in addition to Seattle and Edmonds.

Viola and Joe were members of the Berean Bible Church in Shoreline. Graveside services for the family were held at Acacia in Seattle.