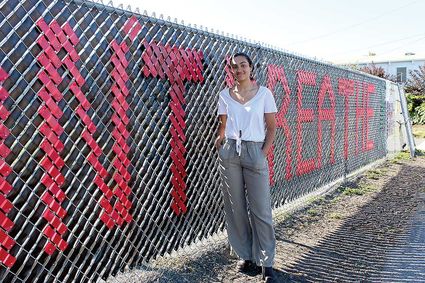 Christabel Jamison with her temporary art installation on the Sixth Avenue North fence after it was repaired.

The artist who created the "I Can't Breathe" art installation in Edmonds quickly repaired it Tuesday, July 14, after a vandal defaced it earlier in the day.

"I've heard some people were upset by the installation," said 18-year-old Christabel Jamison. "I was shocked that someone would actually take it that far to vandalize it."

The witnesses provided police with the suspect's vehicle license plate. Officers responded to...