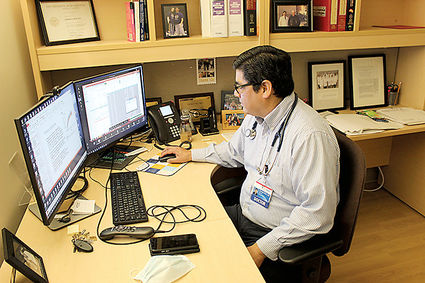 George Diaz at this desk at Providence Regional Medical Center in Everett, where he specializes in infectious diseases.

On Jan. 20, shortly after returning from training in Florida for infectious disease specialists like himself, Dr. George Diaz was on call beginning at 7 p.m. for Providence Regional Medical Center in Everett, where he's worked for 15 years.

An hour and a half later, the Edmonds resident received a life-changing page from the hospital's infection-prevention manager: A man later determined to be the first person in the country to test positive for COVID-19 was due to arrive at the hospital.

Diaz became that patient's main doctor and, since that day, has made numerous appearances on cable news channels, was featured in Time magazine, and collaborated on an article published by the prestigious New England Journal of Medicine.

"Before COVID, I was sort of an anonymous infectious disease doctor working at Providence," the 49-year-old said with a smile recently from his hospital office.

"My life changed quite a bit. You know, not only having seen the first patient in the U.S., but all the media attention that came to us here about how we managed him, and then subsequently the work that we've done with all our clinical trials for COVID. That's kept us in the spotlight."

All that public attention has meant another layer of work for Diaz on top of actually practicing medicine. He said his wife – they have five children – has helped shoulder the load at home during all the long hours.

"Seeing patients, starting clinical trials, having a lot of media duties, has really made it an extremely full time job," he said. "Thankfully, my wife has been very supportive and takes care of the children, and doesn't yell at me for getting home late."

On Jan. 15, a 35-year-old man returned to his Snohomish County home after a trip to Wuhan, China, ground zero for COVID-19's origination. Four days later, not feeling well, he entered a Providence urgent-care clinic complaining of a fever, while also mentioning his trip overseas.

The clinic immediately rang the Snohomish Health District, which relayed the patient's information to the Washington Department of Health, which contacted the Centers for Disease Control and Prevention in Atlanta.

CDC technicians worked into the night running tests on samples from the man's nose, throat, and mouth the clinic had rushed over. They confirmed the first positive COVID-19 test identified in the U.S.

Providence Regional Medical Center admitted the man and placed him in a special pathogens unit – complete isolation – created in 2015 during the Ebola crisis. Diaz and his medical team communicated with the man through a window and gathered vital signs with a computer – equipped with a robotic stethoscope – attached to a wheeled device.

The man's vital signs remained relatively stable during the first few days of isolation, Diaz said. But his temperature eventually spiked to 103 F and, on the sixth day, difficulty breathing led to the placement of supplemental oxygen.

That's when Diaz, acting on recommendation from the CDC and entering unchartered territory, begin treatment on the man with remdesivir, a broad-spectrum antiviral that a peer-reviewed study Jan. 10 showed positive results in animal models, testing it against SARS and MERS which, like COVID-19, are both coronaviruses.

After Diaz explained possible benefits of the drug, the man agreed to a trial that would be administered through an IV.

First, though, Diaz had to obtain the medication manufactured by Gilead Sciences in Foster City, California. He said he went through so-called "compassionate use" protocols, which allowed the drug company to release remdesivir to a patient with serious COVID-19 complications. The drug had not yet proven effective against COVID-19 in humans, but Diaz received approval to administer it from the Food and Drug Administration.

"You petition the FDA to use a drug on a compassionate-use basis because you think it's likely going to help a patient," Diaz said. "They had to do their due diligence and review all the patient's records. I think they were up all night studying his charts."

On Jan. 27, FDA signaled its approval, and Gilead shipped 11 vials of remdesivir to Providence. The next day, Diaz said the patient showed a remarkable improvement and was taken off supplemental oxygen.

After Diaz's collaborated paper on the case was published on March 5, the calls for remdesivir quickly came from hospitals nationwide.

Now, the FDA has issued an emergency use authorization for remdesivir for the treatment of hospitalized patients with severe COVID-19, although the FDA has not yet fully approved the drug outside of "compassionate use." (Remdesivir is, however, approved for use on severe COVID-19 patients in Japan under the brand name Veklury.)

Since remdesivir has been effective in some patients, there have been other drugs that have been mentioned as possibly helpful to those with advanced COVID-19. That includes a dexamethasone, a corticosteroid approved 59 years ago and used in a wide range of conditions for its anti-inflammatory and immunosuppressant effects.

But Diaz said he is being cautious with new treatments.

"There were limited reports (concerning dexamethasone) coming from China, where they have been using steroids quite a bit. And it didn't seem to have much in the way of benefit. There seemed to be side effects with secondary infections, so at least in the U.S., most hospitals haven't been using steroids to treat people with COVID."

Diaz said Providence has seen more than a couple of hundred of patients with COVID-19. He remains in touch with his first COVID patient, who wishes to remain anonymous.

Although remdesivir has seen some success in trials, and other drugs are continuously being studied, Diaz and other infectious disease specialists say a vaccine for COVID-19 might not be available until next spring, or later.

(On July 14, a COVID-19 vaccine tested in Seattle and Atlanta developed by the biotechnology company Moderna, in partnership with the National Institutes of Health, was found to induce immune responses in all volunteers who received it in a Phase 1 study. It's the first U.S. vaccine candidate to publish results in a peer-reviewed medical journal. A final study begins this month.)

In the meantime, some have tried to fill the vaccine gap with unproven drugs.

President Donald Trump and Brazil's President Jair Bolsonaro have touted the effectiveness of hydroxychloroquine. Trump said he's taken the unproven drug, and Bolsonaro said he is now on a course of after testing positive for COVID-19.

"There's been bad data regarding hydroxychloroquine, and so it's been removed from guidelines nationally," Diaz said. "There was a clinical trial within our health system looking at hydroxychloroquine, but that was stopped based on data coming out already."

Diaz also has a thought on injecting disinfectant, which Trump suggested might be an option.

"We would strongly recommend not to inject anything into yourself," he said.

Although Providence in Everett is not currently one of many public and private agencies working on a COVID-19 vaccine, researchers at Providence Cancer Institute in Oregon are testing vaccines in clinical trials.

Providence in both Oregon and Washington are also working on a study called "Testing Our Heroes," a volunteer project that looks at the prevalence of antibodies in the hospitals' caregivers.

"What we're looking to try to answer are risk factors for exposure to COVID that we can detect by doing antibody testing," Diaz said. "We're in the process of doing that here in our hospital now."

As an Edmonds resident, there's a chance Diaz will eventually make it to Walkable Edmonds on Main Street, a pilot project banning vehicle traffic for three blocks from morning to evening on weekends.

He'll be wearing a mask. 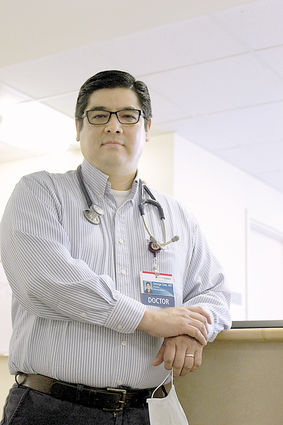 George Diaz: "Before COVID, I was sort of an anonymous infectious disease doctor working at Providence."

"If people are out and about, I think the masks are a good idea," he said, especially now that Gov. Jay Inslee has mandated wearing of masks a requirement in public spaces.

Although masks are mandatory, those who dine on the many street tables remove them when eating, of course.

"I think eating outdoors makes a lot of sense," said Diaz, "because the air circulates a lot better outdoors and indoors. Wearing masks is a good idea; social distancing is a good idea. I think that, thankfully, we've had good leadership within our state, and in terms of recommendations to to open up, I think if the data is there that says we can be in Phase 2, then it's fine to be in Phase 2.

"But we should still maintain these practices that we know work: hand hygiene, wearing a mask, social, distancing. All those things will prevent disease transmission."