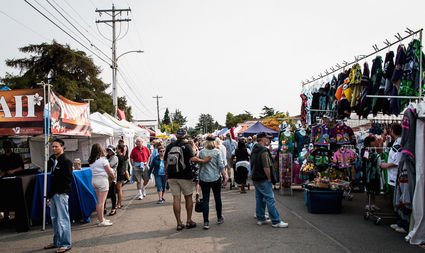 The Edmonds Chamber of Commerce announced Tuesday, July 7, that the 38th annual "Taste Edmonds" scheduled August 14-16 will be moved to September, due to the coronvirus pandemic.

"Given where our state is in the phased reopening plan, it will be impossible to have Taste Edmonds this August, the first time in the festival's history," said Greg Urban, president and CEO of the Edmonds Chamber of Commerce.

"We are holding out hope and moving Taste Edmonds to the last weekend of September. Looking forward to seeing everyone this September 25-27."

The date change doesn't guarantee that Taste Edmonds will happen this year; everything still depends on where Washington state is in the next two months, Urban said.

"Some ask why we are even attempting to hold the event, given the pandemic," said Alicia Moreno, Chamber program coordinator. "Taste Edmonds is first and foremost a fundraiser that directly funds free community events produced by the Chamber each year, including An Edmonds Kind of 4th, the Edmonds Classic Car Show, Halloween Trick-or-Treat, and the Tree Lighting ceremony. Additionally, over $24,000 each year goes to local school and service groups who help staff the festival."

Given the uncertainty of this and other events the Edmonds Chamber of Commerce has launched a fundraising campaign called "An Edmonds Kind of Hero" seeking community donations to keep the Chamber going through 2020.

You can learn more and donate at http://www.SupportEdmonds.com.