Surprise: Walkable Main Street is back – for the foreseeable future 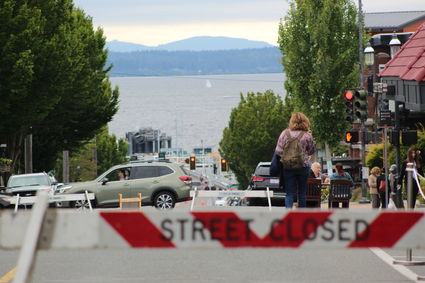 After announcing that it would "pause" Walkable Main Street over several weeks to "work with our community partners to see how we can move this idea forward in a way that works for as many people and businesses as possible," it turns out the pedestrian-only experiment has only skipped one week.

It began the weekend of June 20, was held the next weekend, but skipped the July 4 weekend, which drew the ire of more than a few business owners. (To be fair, many have told the Beacon in confidence that they do not like closing off downtown streets to traffic.)

So, after a hiatus over the holiday weekend, and in response to what the City says is "great community support," Main Street will again be closed to vehicles from Third to Sixth avenues on 10 a.m. to 10 p.m. Saturday, July 11, and 10 a.m. to 9 p.m. Sunday, July 12.

Walkable Main Street will continue for the foreseeable future, the City says.

"We have done a lot of outreach and/or received a lot of detailed feedback," said Economic Development and Community Services Director Patrick Doherty on Tuesday, July 7.

"Our current plan attempts to strike a compromise. Some ideas offered were simply not feasible – like only closing in the evenings or building parklets. After many retailers, restaurateurs, members of the public, and staff shared information, concerns and ideas, we settled on the current plan."

Doherty said the City pulled back from the closure of Fifth Ave South, adding that was one of the most unpopular components from the retailers' perspective, and has added signage about patronizing retailers while enjoying Walkable Main Street.

The idea of closing the street just for evening hours is problematic for a couple of reasons, Doherty said. First, it's tough to move cars out that have already parked for their hours without resorting to towing, which the City doesn't want to do.

Second, for some restaurants it can take 30 to 60 minutes to set up their outside areas, including sanitizing.

"So if we were to close at 6 p.m., as some retailers suggested, they may not be able to seat until 7, and then have to stop seating at 8 or 9 to get ready for close-down," Doherty said. "It's not worth it for them – so infeasible."

"But they were conceived of and in place in various cities, including Seattle and Bothell, from before COVID-19, so they were not designed with social distancing in mind. At most they could accommodate a couple of two-top tables and maybe a bench at social distance. It's a lot of effort for relatively little pay-off." 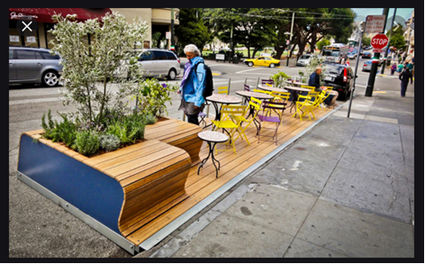 An example of a parklet.

Plus, parklets have two drawbacks, Doherty said: People are still sitting very close to passing or idling cars, which is less pleasant, and parklets presuppose open streets that do not provide the wider, safer, airier pedestrian-flow area the City is aiming for.

"It would still only allow weekend levels of pedestrians – which are higher – to squeeze into our narrow, crowded sidewalks," said Doherty. "Again, not achieving social distancing."

• a larger, safer area for pedestrian flow, allowing for social distancing while strolling

• seating for restaurants and cafés, allowing for safer outdoor dining

• outdoor sales or display for retailers

• members of the public to return to downtown Edmonds in a more welcoming and safer manner and to re-engage with shops, services, and restaurants.