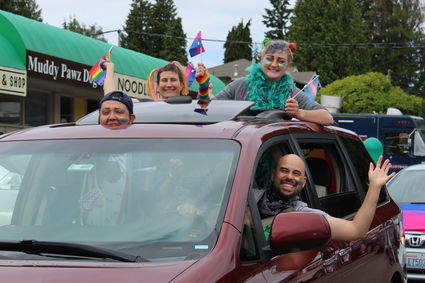 The car Pride parade pauses for pictures at Five Corners.

A seven-car Pride parade drove through Edmonds on Sunday, June 28, during Pride weekend, established 50 years ago in New York to celebrate the LGBTQ community.

The process made its way through various neighborhoods, passing some predetermined houses of Pride members.

"Anyone we passed along the way – walkers, little kids on bicycles, joggers – was waving and clapping for us," said Pride of Edmonds' Lori Kunze, who led the parade in her colorfully decorated car, with a black balloon on top celebrating Black Lives Matter.

Car honked in support. One house captured the procession on its ho...

Hey Brian, great write up, thanks!!