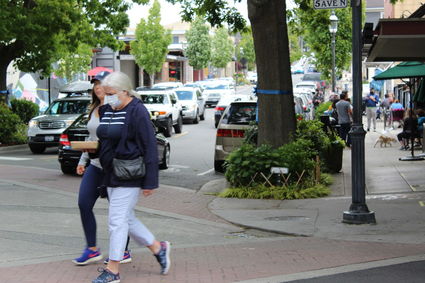 Main Street by the fountain is becoming more crowded with cars and pedestrians as the City continues with Phase 2. Main Street will be closed to traffic for three blocks this weekend.

It's Edmonds' newest controversy: Open up Main Street to pedestrians only? The City took its first step to that possibility when Mayor Mike Nelson announced the dates for the first pedestrian-friendly weekend along Main Street.

The weekend of June 20-21, which is Father's Day weekend and the first official weekend of summer, the City will close Main Street to vehicle traffic between Third and Sixth avenues, opening the street to pedestrians and local businesses that want to move outdoors.

Nelsonnencourages businesses in other areas, like Westgate, Five Corners, and in the Highway 99 corridor, to also move tables outside.

"It's been a tough spring for residents and businesses and we are all excited to get out and try something new to jump-start our summer as businesses gradually – and safely – reopen," said Nelson.

"How can Edmonds become even more inviting?" Steves wrote. "It's all about parking the car and walking a couple of blocks to enjoy a small town without traffic. Imagine: A petite piazza of our own."

"We hope restaurants will open up sidewalk seating, and retail stores can bring items outdoors. Our goal is to provide more space for people to walk, dine and shop – safely as we will encourage use of masks and appropriate social distancing," said Nelson. "If people respond well, then it may become a regular weekend summer closure."

Edmonds is not the first and certainly won't be the last Washington city to close local streets to pedestrians, Nelson said.

And closing Main Street has precedent.

According to the Edmonds Historical Museum, in December 1959 the City Council chose to do a experimental 45-day test-run closing the section of Main Street between Third and Fifth avenues, beginning Dec. 15.

By January 1960, the "mall" was changed to a parking mall with limited one-way traffic. It was then reestablished as a closed street for the third Edmonds Arts Festival in May 1960.

The goal was to actually alleviate parking issues, opening up parking from parallel to angled.