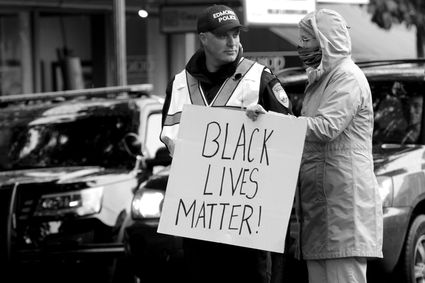 Edmonds Police Cpl. Ryan Speer listens as a Black Lives Matter marcher speaks with him during the peaceful march through town.

Up to 1,000 people marched through downtown Edmonds June 12 in an event promoted as a peaceful, silent march to support Black Lives Matter.

The march was one of more than 35 recognized by Black Lives Matter Seattle-King County. Ilana Balint organized the event.

"I kept going to the Westgate protests every day," said Balint before the march, referring to recent demonstrations on the corner of Edmonds Way and 100th Avenue West. "I thought maybe it wasn't enough."

Balint saw that the Seattle Black Lives Matter chapter made a call to the public to organize in their hometowns. So she organized o...