Police Chief answers questions on use of force, body cameras and more 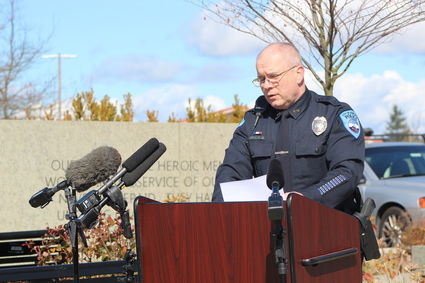 As members of communities across the country continue to express their pain and frustration surrounding the death of George Floyd, as well as examples preceding and sadly subsequent to that tragedy, many questions have been asked of Mayor Nelson, the Edmonds City Council and the Edmonds Police Department.

The majority of those questions revolve around what your police department does in addressing various aspects of use of force, bias/racism, and officer complaints.

Here is compilation of those questions and what steps your police department has taken.

Do you ban chokeholds/strangle holds?

Yes, the use of chokeholds/strangleholds are specifically prohibited by Edmonds Police Department Policy 307 .Z(b)1.

ln addition, effective immediately, the application and utilization of the lateral vascular neck restraint (sleeper hold/carotid) has been expressly prohibited as an approved technique.

Do you require de-escalation?

Yes. ln every use of force training conducted by the Edmonds Police Department,

the department's use of force policy is reviewed. EPD policy 300.3 – Use of Force states, "Officers shall use only that amount of force that reasonably appears necessary given the facts and circumstances perceived by the officer at the time of the event to accomplish a legitimate law enforcement purpose."

Do you require warning before shooting?

Yes. EPD policy 300.4 – Deadly Force Applications states, "a verbal warning should precede the use of deadly force, where feasible.

Are officers required to exhaust all alternatives before shooting?

Yes. ln every use of force training conducted by the Edmonds Police Department, the department's use of force policy is reviewed. EPD policy, (EPD Policy 300.3), "Officers shall use only that amount of force that reasonably appears necessary given the facts and circumstances perceived by the officer at the time of the event to accomplish a legitimate law enforcement purpose."

Do you require a duty to intervene?

Yes. EPD policy 300.2.1 – Duty to lntercede (intervene) states, " Any officer present and observing another officer using force that is clearly beyond that which is objectively reasonable under the circumstances shall, when in a position to do so, intercede to prevent the use of unreasonable force. An officer who observes another employee use force that exceeds the degree of force permitted by law shall promptly report these observations to a supervisor."

Are officers banned from shooting at moving vehicles?

Officers are not banned, but highly restricted. EPD policy 300.4.1 – Shooting at or From Moving Vehicles states, "Shots fired at or from a moving vehicle are rarely effective. Officers should move out of the path of an approaching vehicle instead of discharging their firearm at the vehicle or any of its occupants. An officer should only discharge a firearm at a moving vehicle or its occupants when the officer reasonably believes there are no other reasonable means available to avert the threat of the vehicle, or if deadly force other than the vehicle is directed at the officer or others.

"Officers should not shoot at any part of a vehicle in an attempt to disable the vehicle."

Do you have a use of force continuum?

No. Use of force continuums have not been broadly used, nor taught within the state of Washington for approximately 10 years. The legal standard for police use of force and applicable training is reasonableness.

The EPD policy 300.3 – Use of Force states, "Officers shall use only that amount of force that reasonably appears necessary given the facts and circumstances perceived by the officer at the time of the event to accomplish a legitimate law enforcement purpose."

The "reasonableness" of force will be judged from the perspective of a reasonable officer on the scene at the time of the incident. Any evaluation of reasonableness must allow for the fact that officers are often forced to make split-second decisions about the amount of force that reasonably appears necessary in a particular situation, with limited information and in circumstances that are tense, uncertain and rapidly evolving.

Given that no policy can realistically predict every possible situation an officer might encounter, officers are entrusted to use well-reasoned discretion in determining the appropriate use of force in each incident.

Additionally, EPD Policy 300.3.2 – Factors Used to Determine the Reasonableness of Force states, "When determining whether to apply force and evaluating whether an officer has used reasonable force, a number of factors should be taken into consideration, as time and circumstances permit. These factors include, but are not limited to:

• lmmediacy and severity of the threat to officers or others.

• The conduct of the individual being confronted, as reasonably perceived by the officer at the time.

• The effects of drugs or alcohol.

• The degree to which the subject has been effectively restrained and his/her ability to resist despite being restrained.

• The availability of other options and their possible effectiveness.

• Seriousness of the suspected offense or reason for contact with the individual.

• Training and experience of the officer.

• Potential for injury to officers, suspects and others.

• Whether the person appears to be resisting, attempting to evade arrest by flight or is attacking the officer.

• The risk and reasonably foreseeable consequences of escape.

• The apparent need for immediate control of the subject or a prompt resolution of the situation.

• Whether the conduct of the individual being confronted no longer reasonably appears to pose an imminent threat to the officer or others.

• Prior contacts with the subject or awareness of any propensity for violence.

• Any other exigent circumstances.

Does all force have to be reported?

Yes. EPD policy 300.5 – Reporting Use of Force states, "Any use of force by a member of this department shall be documented promptly, completely and accurately in an appropriate report depending on the nature of the incident. The officer should articulate the factors perceived and why he/she believed the use of force was reasonable under the circumstances.

"Whenever an officer employs an amount of force that compels compliance from a person in the course of affecting an arrest, overcoming resistance, or controlling a dangerous situation the officer will submit a Use of Force report.

"The report will be used to collect data for purposes of training, resource allocation, analysis and related purposes."

Do you have officer worn body cameras?

No. We do not currently have a body worn camera program. I am, with Mayor Nelson's full support, committed to the acquisition of body worn cameras and the implementation of this program.

I truly hope this addresses some of the concerns expressed by members of the community and solidifies your trust and confidence in the amazing men and women of the Edmonds Police Department who so proudly serve you each and every day.