'I had to do something': Protesting in Westgate 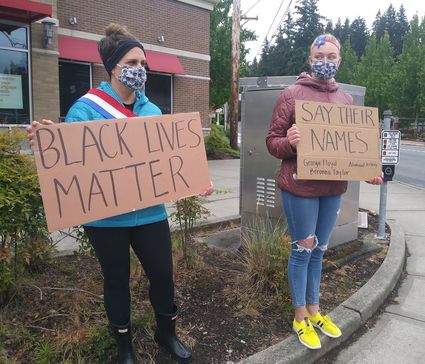 Leah Hertl, left, and Linnea Ekstroem hold up signs on the northeast corner of Edmonds Way and 100th Avenue West in Westgate.

It's a far cry from the mass scenes of protests nationwide after the killing of George Floyd, a black man who died after a white policeman in Minneapolis pinned him under his knee for nine minutes.

But there have been scattered protests at the corner of Edmonds Way and 100th Avenue West in Edmonds' Westgate neighborhood.

"I'm a white person, and I recognize I have privilege," said Edmonds resident Leah Hertl, who held up a "Black Lives Matter" sign at the intersection. Next to her was Linnea Ekstroem, her au pair, whose sign read "Say Their Names: George Floyd, Ahmaud Arbery, Breonna Taylo...