From the archives: School's in session on the fishing pier

Series: From the Archives | Story 2 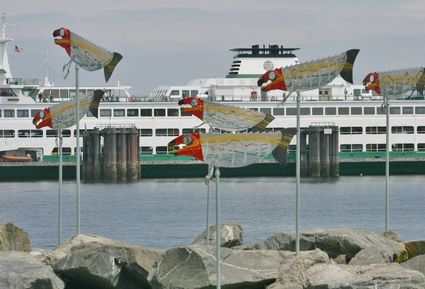 Buster Simpson's Sea Rise Run is installed at the breakwater at the Edmonds Fishing Pier.

The Beacon is occasionally republishing stories we think will be of interest to readers. Here's one on the much-photographed fish installation on the Edmonds Fishing Pier the Beacon published in May 2018. Read it again. Or if you're new to town, enjoy getting to know an amazing artist.

It took 36 years for famed Northwest mixed-media sculptor and environmental artist Buster Simpson to create another installation in Edmonds. It's now available for your viewing pleasure, and is surely to become one of the city's favorite backdrops for photographers of all ages.

It's a new school of nine kinetic fish pieces on the Edmonds breakwater along the fishing pier, just west of where, in 1982, Simpson installed the first set, "Edmonds Breakwater Run – School of Fish."

That particular work depicts salmon created with found metals and refabricated by the artist in 1994. The installation is owned by the Washington State Arts Commission, although the city of Edmonds is responsible for its upkeep.

Simpson didn't create the new installation with Edmonds in mind. He assembled it for a private Seattle corporation, now defunct.

"They were up for grabs, so I rescued them and fixed them up," Simpson said last week as three helpers – fellow artists Kelly Bjork, Joe Freeman and Cody French – assisted in setting up the salmon and mixing concrete to keep them in place on top of painted steel rods.

The new installation, "Sea Rise Run," is made from wood, marine-grade plywood and aircraft-grade aluminum to allow the pieces to oscillate in the wind while resisting metal fatigue. The fish have glass eyes, and the paint is impregnated with reflective glass beads to reflect light, much like highway centerlines.

The project also uses diffraction grating  which works like miniature prisms to diffract light into a spectrum – and Scotchlite, a highway product that also reflects light.

Simpson describes the material as all items used to make lures to catch fish.

Except the forks. The two forks attached to the metal poles of each fish are military surplus. There's red on the end of the forks, which you can interpret any way you'd like.

"I find people bite on the same stuff fish bite on," Simpson said.

Needless to say, the new fish don't look exactly like the old fish. Simpson's projects have always been eclectic, almost dangerous. The term "agitprop" has been thrown out in stories about him.

Simpson, 76, refers to himself as an "urban fisherman," which undersells the impact he's had on the national art scene.

The Wisconsin-born artist was co-director of the art area at 1969's iconic Woodstock music festival – he helped design and build a "playpen" for adults – and two years later joined glass artist Dale Chihuly at his Pilchuck Glass School northeast of Stanwood.

Simpson is a pioneer of urban eco art, and has typically worked directly in the landscape rather than in museums and galleries, according to historylink.org. He has more than 40 permanently sited commissions to his credit in cities across the U.S. and Canada.

In 2013, the city of Seattle selected Simpson to create a permanent installation centered on habitat restoration and open public space at the new Elliott Bay Seawall, a central part of the redesign of Seattle's central waterfront. 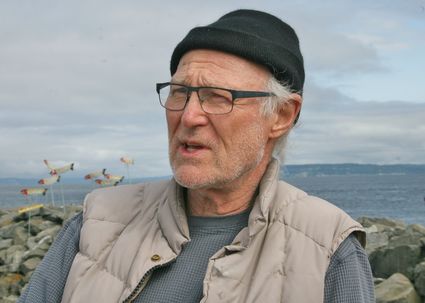 He had another career highlight in 2013,when the Frye Art Museum worked with him to organize his first comprehensive survey.

When it comes to installations such as Simpson's new work in Edmonds, the artist is succinct about it and his other work out in the open.

"The beauty about doing work that's public is that you get people who appreciate it," he said. "And they don't have to go to a museum."