Information from the community helps police locate and pursue suspect 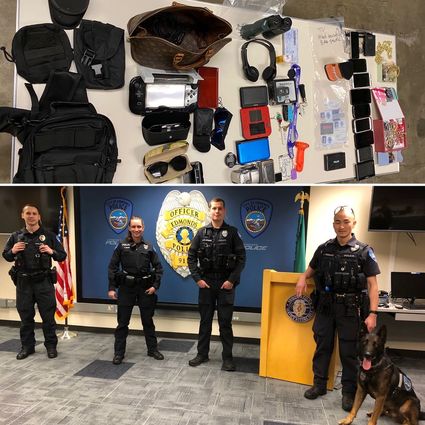 A 24-year-old Lynnwood man has been booked into the Snohomish County Jail in connection with multiple vehicle prowls in the Edmonds-Woodway High School and Five Corners areas.

According to Sgt. Josh McClure, it was during the early morning hours of Monday, May 25, that Edmonds officers were patrolling a residential area recently hit by numerous car prowls. Officers had been able to obtain surveillance footage from some of the recent victims and conducted an emphasis patrol in the area with information on a possible suspect.

Around 2 a.m., a sergeant located the suspect. He fled on foot after dumping the stolen bicycle he had been riding.

Officers and a police dog pursued the suspect for the next several hours, ultimately tracking him to a motel room on Highway 99. A search warrant was obtained and the suspect was arrested out of the hotel room along with an adult female who had an unrelated warrant.

Over 10 bags of suspected stolen property were also recovered as evidence to include jewelry, electronics, mail, prescriptions, and other possible evidence tied to residential burglaries. Additional evidence had been recovered during the pursuit of the suspect.

A detective was assigned to assist with the investigation and go through the significant amount of evidence recovered. The detective also interviewed the suspect before he was booked into the Snohomish County Jail for vehicle prowl, third-degree theft, and possession of drug paraphernalia.

Additional charges are likely as the investigation evolves. The suspect appears to have been staying in local motels for some time.

There is a substantial amount of evidence to go through and follow-up investigation to complete, McClure said. Detectives believe they have evidence for over 20 victims, and will reach out to them.

"This arrest is a result of good communication between our community and our officers who have responded out to many of these prowl locations," McClure said. "Some of the reports that came in during the day on Sunday had surveillance photos of the suspect where a vehicle and clothing were clearly identifiable. Those images were what allowed our night-shift patrol officers to put together a plan in an effort to locate the suspect."

If you are an Edmonds resident and recently had items stolen from your vehicle but did not notify police, call 425-407-3999 to have an officer contact you, or visit mycrimereport.us if you want to file a report online.

Having serial numbers or other identifiable markings for your items will help detectives as they work through this investigation, McClure said.