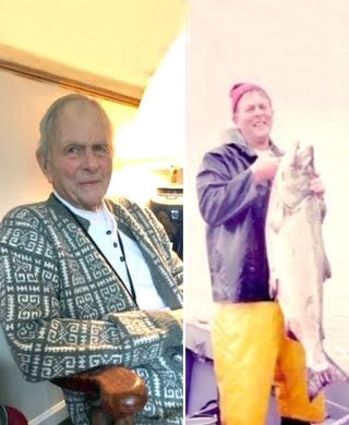 I must go down to the seas again, to the lonely sea and the sky,

And all I ask is a tall ship and a star to steer her by;

And the wheel's kick and the wind's song and the white sails' shaking,

And a grey mist on the sea's face, and a grey dawn breaking.

I must go down to the seas again, for the call of the running tide

Is a wild call and a clear call that may not be denied;

And all I ask is a windy day with the white clouds flying ,

And the flung spray and the blown spume, and the sea-gulls crying.

I must go down to the seas again, to the vagrant gypsy life ,

To the gull's way and the whale's way where the wind's like a whetted knife;

And all I ask is a merry yarn from a laughing fellow-rover,

And quiet sleep and sweet dream when the long trick's over.

Ralph was the sixth child of Ralph and Borghild (Belle) Sorensen, joining Lillian, Roy, Annabelle, Robert, and June. He is survived by June Crump (his sister) and 10 nieces and nephews; Robin and Jim Gates, Paul Sorensen; Ann and Bud Baker; Gayle Crow Crawford; Terry and Ginny Crump; Bob and Trisha Crump; Eric and Karen Crump; David and Denise Crump; Heidi and Gary Duncan; and Gretchen and Brian Guillette, and many great nieces and nephews.

Ralph was born in Edmonds, WA, and maintained his home there, graduating from Edmonds High School in 1946. He attended Everett Community College before being called to serve his country in the Korean War, where he was assigned to an artillery battery. Upon returning from the war, he worked for a short time at the Quality Shingle Mill in Edmonds.

He went on to became an apprentice boat builder at Howard Anderson Boat House, which later became Anderson Marine next to the Edmonds ferry terminal. Ralph specialized in building commercial fishing boats. He started his own boat shop called Tidewater Boat Works, where he built gillnetters, trollers, seiners, and did repairs on sailboats or anything that floated and was made out of wood.

There is a picture of Ralph at the Edmonds Waterfront Park, adjacent to the Edmonds ferry dock, of him and his boat in one of the many pictures paying tribute to the pioneers who made Edmonds a great place to live. Ralph was also a successful commercial fisherman, fishing in Bristol Bay, Alaska, for over 50 years, as well as other parts of Alaska and Washington.

Ralph was a master craftsman with wood and could always be found at his favorite workbench in his basement of his home in Edmonds, working on a new project or repairing something for one of his many friends. One of his prize creations was a beautiful violin and case, which was recently played at his resident at Sunrise Assisted Living in Edmonds by an accomplished musician.

Ralph enjoyed hunting and fishing, gardening, and doing nice things for others. A storyteller, he was always entertaining recalling his adventures in Alaska, the ocean beaches, and all over the great Pacific Northwest. He loved his mornings at the Edmonds McDonald's with his coffee group, which he missed so much after moving into assisted living at Sunrise of Edmonds.

The family would like to thank the staff at Sunrise of Edmonds for their wonderful care of Ralph over the past three years. Ralph will be missed by all his family and friends, as he has given us all such great and wonderful memories. Memorial donations are suggested to the Seattle Fisherman's Memorial, https://www.seattlefishermensmemorial.org/, or the charity of your choice.