'It's kind of this fun little soap opera in your backyard' 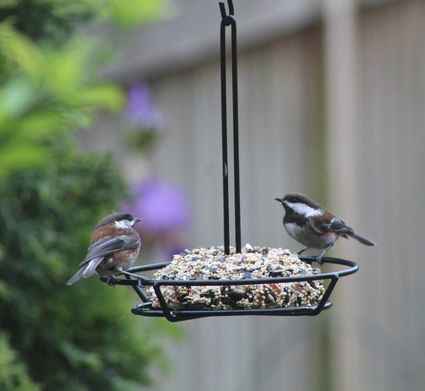 In Edmonds: Chestnut-backed chickadees practice social distancing before deciding which one is going to dive in first.

Studies show that hobbies improve mental health, but COVID-19 has made some hobbies and activities impossible, or at least put them on hold. Puget Sound bird experts agree that one thing people can still do while staying safe is bird watching.

Edmonds is home to the seashore, parks, lakes, and the type of wetland terrain perfect for Washington birds. Local and seasoned bird watchers say bird watching is an easy and fun hobby to do from home.

"It's kind of this fun little soap opera in your backyard," said University of Washington ornithology lecturer and longtime bird lover Kaeli Swift.

Washington is home to hundreds of bird species. Some of the most common ones in the Edmonds area are Steller's jays, chickadees (chestnut-backed and black-capped), and bushtits. The Steller's jays, often mistaken for a blue jay, are blue with a charcoal colored head. The ones found in western Washington have a distinct blue eyebrow.

"The ones that we have with the two little blue lines above their eyes are unique to the Western wet forest," said Rick Taylor of the Pilchuck Audubon Society.

Taylor leads the annual Washington Christmas Bird Count for south Snohomish County, where the society is located. The count acts as a bird census and is conducted every year by thousands of volunteers.

Bushtits, "a northwest specialty" as Taylor called them, are very small birds with a tail that makes up half their body length.

"(They're) pretty common little bird and they're just really cute," he said.

Having a bird feeder is a quick and easy way to attract the avians, but don't put it too close to the window. Taylor suggests putting it at least 15 feet out so the birds don't get confused by the reflection.

Different birds are attracted to different foods, but some common favorites are unsalted peanuts (in and out of the shell), black oil sunflower seeds, and suet cakes (a mixture of fat and seeds or grain shaped in a ball, commonly found in stores with the birdseed).

"The Steller's jays will go absolutely bonkers over unsalted peanuts in the shell," Taylor said. "They will eat you out of house and home."

Binoculars and a field manual of birds will help too, but there's no need to break the bank on birding equipment. Field manuals can be new or used books, or just a phone app. Many birding apps are free to download, like Merlin Bird ID. Taylor helped the Cornell University ornithology lab create the app.

Once you've spotted the birds, Swift highly recommends drawing them.

"Get in the habit of sketching the birds," Swift said. "That is one of the most valuable ways that you figure out what they are."

She recommends this specifically for new bird watchers so they can practice discerning the subtle features of a bird that will later help in identifying it.

Nest building and breeding happen throughout the summer for several bird species, like song sparrows. A way to encourage nesting is by planting native plants and providing cover, like shrubs or trees, according to Swift.

If you've run out of Netflix shows to watch, or you just want to get out and enjoy nature, perhaps birding may become your new hobby.

"There is something so incredibly soothing about watching them work."

Editor's note: Miranda Milton is a senior at the University of Washington studying journalism and wrote this story for the Beacon as a part of the UW News Lab.