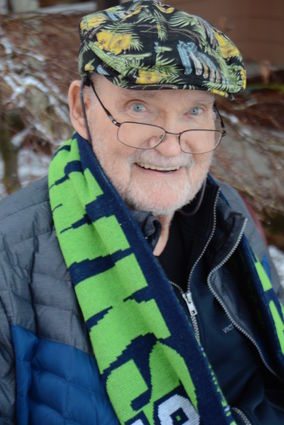 Thomas Royal Newitt, M.D., (Tom), age 95, pulled up anchor on April 22, 2020, sailing beyond our earthly shores. He was an amazing father, friend to many and respected by all, and who navigated his life true to himself. Tom was a sober member of Alcoholics Anonymous, and he freely shared his love of AA with others.

He served in the US Navy during World War II and Korea, but was proudest of his assignment to the Marines at Camp Pendleton.

Tom graduated from Jefferson Medical College and spent his medical career mainly at Little Company of Mary Hospital in Torrance, CA. Upon retirement in 1988, with a move to the San Diego area, he continued to work in the medical periphery until very recently, keeping his mind sharp.

He also enjoyed many classes and workshops in the arts, music, writing, woodworking, computing, and many other passions. With his family and friends he enjoyed skiing, scuba diving, sailing – he had countless diverse interests, hobbies and talents!

In his twilight years, after he moved to Edmonds, WA, he was an avid pétanque player in the local club. He did it all!

Tom liked adventure, travel, and had a childlike enthusiasm for the simplest things. A longtime Ham Radio operator (WB6BBU) and later as part of Emergency Preparedness, he was always ready to help in potential disasters.

Much of his life involved learning and serving, teaching others in his patient, gentle way. Described by many as a True Gentleman, he lived with dignity and grace.

In his immediate family, he leaves daughter Heidi and son-in-law Martin of Kingston, WA; sons Chris and Lance of Cedar Rapids, IA; brother Cyrus of Cincinnati, OH; and two former wives. We shall all miss him very much-his kindness, thoughtfulness, and wit. We so appreciate the care and comfort he received from the wonderful staff at Mountlake Terrace Plaza in his final years.

In lieu of flowers, you may wish to donate a gift to Hospice Care or a favorite charity.

A Celebration of Tom's Life will be coordinated with Edmonds Pétanque Club as soon as it is possible to gather and play another round in his honor.