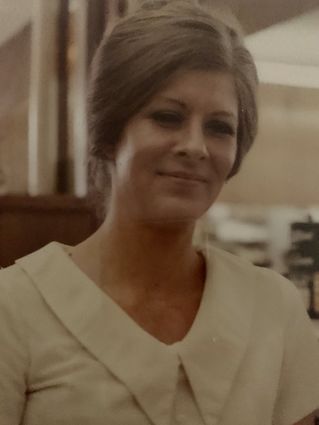 Gloria Ruth Priebe (nee Perkins), age 85, passed away at her home in Edmonds on Friday, April 17, 2020. She is survived by her two daughters, Lynette Schonhoff and Laurene Johnson (Craig); along with four loving grandchildren, Alex and Jessica Stefansson, Ruth Hunt, and Christopher Johnson; two great-grandsons, Jack and Holden Stefansson; and her longtime companion, Malcolm Clarke, whom she dearly loved.

Gloria was one of a kind. She was born with an extra sparkle of life that never failed to attract others. She was beautiful, kind, generous, fun-loving, and brought joy to the hearts of all who knew and loved her.

She was born in 1935, in Antioch, California, to Sumner Ellis and Ethelwyn Bertha Perkins (nee Harmson). Her childhood was spent in many of the cities in Southern California, and later, in Berkeley.

Gloria attended Anna Head School, where she took particular delight in annoying the nuns. When not in school, she was usually barefoot and roamed the Berkeley Hills with her friends and twin brothers, Art and Jon.

Mom attended UC Berkeley, where she met and married Lanny Schonhoff, the father of her two devoted daughters, Lynette and Laurene. They lived at various times in Berkeley, Reno, Lake Tahoe, Fremont, and Pleasanton, California.

In 1970, the family moved to Edmonds, Washington, which Gloria considered the most beautiful place in the world and her beloved home for the rest of her life.

Upon their arrival in Edmonds, Gloria began volunteering with the reading program at Edmonds Elementary School and helped many children become more proficient readers. She also volunteered with the Driftwood Players and made many lifelong friends there.

A while later, she began a career as a pharmacy technician at Schofield Pharmacy. She ran the register, kept the store's shelves stocked and delivered prescriptions, sometimes on foot. Mom knew most of the town and most of the store's customers could also be counted as her friends.

In 1977, Gloria married Max Priebe and was a loving stepmother to his three children, Marc, Lon, and Marcia, and his three grandsons.

After retirement, Mom was finally able to build the dream house she had designed in High School, on the site of her old home on Maple Street. She enjoyed growing tomatoes and flowers in the atrium and threw many well-attended parties, complete with bands, in her lovely home.

She was also able to volunteer at the Edmonds Center for the Arts. It was there she met fellow volunteer, Dick Passey, who was her beloved companion for a few wonderful years before his passing.

The last few years, she was mostly housebound with mobility issues. Her many friends and family visited often and shared much joy and lively conversation. She kept busy reading, doing crossword puzzles with her daughter Laurene, and enjoying the companionship and songs of her longtime partner Malcolm Clarke.

Gloria will be mourned, missed, and loved to the moon and back forever and ever.

A fiesta in celebration of her life well-lived and love of Mexican food will be held sometime in the future.

In lieu of flowers, donations may be made to PAWS at: https://www.paws.org/support/donate.

"They lived and laughed and loved and left" – James Joyce.