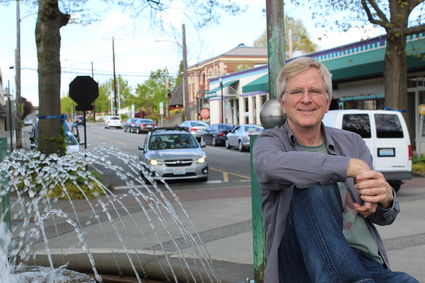 Sitting at the fountain at Fifth and Main, as I do occasionally in a very gentle act of civil disobedience, I wave at passing cars as if they were people strolling by. I conjure up a traffic-free scene of busy shoppers, moms and dads with strollers, and sidewalk café tables brimming with happy diners.

What if the core of Edmonds – just one block on each of the four streets from the fountain – was pedestrian-only? What if every day felt like the Saturday Market? Then, a police officer interrupts my fantasy, and with a friendly wink, asks me to move along.

Edmonds is a special community, blessed with a charming downtown. Our market day is a hit, flower baskets adorn the streets, and colorful shops beckon passersby. Imagine a ring of benches around the fountain, where you could actually hear the wind in the oak trees, the bird song, and the pitter-patter of the water.

This central core is appreciated, but it could become beloved. Why do people so love Italy? The passeggiata. What charms us about Spain? The paseo.

How can Edmonds become even more inviting? It's all about parking the car and walking a couple of blocks to enjoy a small town without traffic.

Imagine: a petite piazza of our own.

If Edmonds were in Europe, the center would be for pedestrians. Sure, there are lots of excuses on why this won't work here. (European merchants had the same excuses before visionary city councils opened up zones for their pedestrians, too.)

But we have bad weather. So does Ireland. What about parking? Even medieval European towns have parking. What about vehicle access? Early mornings are for truck deliveries, and residents and business owners can use the alleys (or have cars with sensors that lower the barriers for access).

What about traffic flow? A perimeter route for drivers (called a "peripherie" or "ring road" overseas) is designated for a one-way flow around the central core reserved for humans and bikes.

Won't businesses suffer? Europe's experience: After the traffic-free zone is set up, customers flow into the shops and once-skeptical merchants become converts. Merchants on neighboring streets want in on the action, clamoring, "What about us?"

Next time you're strolling past the theater, hanging out at Starbucks, waiting for your fish 'n' chips at The Market, or chatting with friends during the Thursday art walk, envision how pleasant this central core would be without traffic-a friendly place where people with dogs, kids, and our seniors could cross the street without worrying about carrying an orange flag. 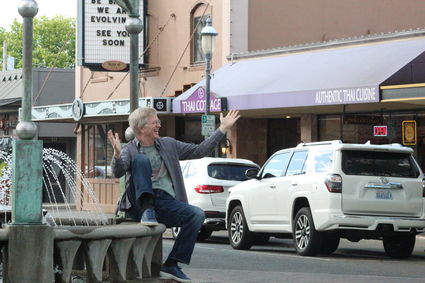 It's time to give it a whirl. I think our current city government would be open to trying it out. Of course, during the COVID-19 crisis, many of the joys of a people-friendly city core would be on hold, but especially during this crisis, it would be a boon if restaurants could spill onto the sidewalk to serve more diners while allowing for social distancing.

Virus or no virus, I'd happily dine or drink outside, enjoying a lively scene of pedestrians rather than noisy cars and exhaust fumes.

I won't encourage you to sit and dream at the fountain like I do. It's hazardous.

But what if it weren't? Imagine this little slice of our town dedicated to people rather than cars. You could sit at the fountain licking an ice cream cone. And if a police officer came up to you, rather than ask you to make way for cars, he'd say, "It's an Edmonds kind of day."

Rick Steves is the founder and owner of Rick Steves' Europe on Fourth Avenue North.

I love this idea. I live two blocks from the fountain and would not mind driving out of my way to avoid pedestrians and make eating and wandering outside safer. After leaving NYC and returning, I was shocked that Times Square was closed to cars. It has transformed the area and traffic managed to find its way. Sabrina Friend

Yes - I truly can imagine this! Rick took me there immediately in my mind with his usual great story telling. And if full time is not an option, what about part time; perhaps 2 weekends a month to try it out? It could be wonderfully delightful.