Living in a foreign land during the COVID-19 pandemic 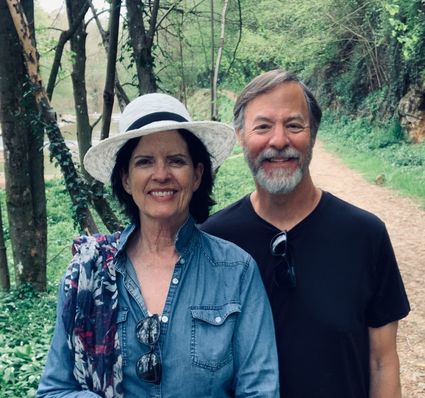 Edmonds residents SharonAnn Hamilton and husband, Dan Fuller, were in France when the country went into lockdown due to the coronavirus pandemic.

As international pet and house sitters, SharonAnn Hamilton and her husband, Dan Fuller, expected to be busy visiting museums and attending wine tastings when they arrived in France.

Instead, the Edmonds couple is spending most of their time going on long walks, shopping for groceries and hanging out in their apartment, as France and the rest of the world are largely quarantined due to the coronavirus pandemic.

For former Mukilteo City Councilmember Charlie Pancerzewski, his annual trip to New Zealand was largely business-related, though he and his wife, Gayle, have owned a house there for 20 years. Pancerzewski came to help oversee the harvesting of olives on their farm. Gayle stayed back in Mukilteo this time. The Pancerzewskis also were selling their New Zealand house, and he came to go through all of their belongings and ship some back to Mukilteo.

Shortly after Pancerzewski's arrival at the end of February, New Zealand started restricting people entering the country by having them voluntary self-isolate for 14 days. Soon, the country went into lockdown.

Hamilton, who writes the Free Wheelin' column in the Beacon's monthly Prime Living section, arrived just in time before France started with its quarantine. No one was wearing masks on the trains and rumors of a potential lockdown were circulating, but the government had not made any announcements.

Isolated in a foreign land

The Pancerzewskis' farm is located in a sparsely populated area with the nearest grocery store about 30 minutes from the house.

Grocery stores were even more critical in New Zealand, since restaurants, until a few days ago, were not open for takeout. That meant for Pancerzewski, the only place to get food was in the supermarket and smaller food stores. He was fixing all of his meals and eating a lot of canned and frozen food, as he admits he is not a cook.

"My wife did not come with me on this trip, and she has always done most of the meal preparation and cooking," Pancerzewski said. "I enjoyed two quarter-pounders yesterday, the first I have had for six weeks."

Hamilton and her husband are staying in an apartment located in Châtillon-D'Averges, a small town 20 minutes from Lyon.

"Houses are far away," Hamilton said. "We're able to go out walking every day, 3 to 6 miles. We hardly ever see anybody. Since I've been here, a little over a month, I've seen one police officer in one of the villages where there is a grocery store."

Whenever residents leave their homes, they are supposed to carry a certificate detailing what they are doing – shopping for groceries, a doctor's appointment, or going out for exercise.

"Everyone has to print it out and carry it," Hamilton said. "It is supposed to be signed and dated every day."

Residents face a potential fine if they are caught without a document or if they are out doing something different than what is stated on the form.

New Zealand residents are advised to keep 6 feet apart and are not supposed to interact with anyone who they do not live with, Pancerzewski said.

People wear masks when they go to the grocery store, and stores limit the number of people who can be in the store at one time. So lines in front of stores are commonplace.

"In our area, most seem to be very conscious of the need for distancing," Pancerzewski said. "From news reports, that is not always the case in the larger New Zealand cities."

New Zealand has less than 1,500 coronavirus cases, though, and only 21 deaths out of a population of 4.9 million.

In the town where Hamilton shops, grocery stores also started restricting the number of shoppers and having them line up outside.

Hamilton estimated 70% of shoppers wear masks, though she has not seen them, or gloves or hand sanitizer, for sale at any store.

Hamilton feels fortunate to be living in a separate apartment after the people they were going to be housesitting for canceled their trip to India.

"They said stay here as long as you need to," Hamilton said. "We're grateful. We feel fortunate and blessed we have this place. We are independent."

Pancerzewski said that the government has not given any estimate of when life will return to normal.

"If the definition of normal means like it was in December or January, that may be a long time," he said. "New Zealand depends on a lot of tourists. So with none now coming, that is having and will continue to have a big impact on the economy."

Passenger flights into New Zealand have almost stopped since everyone, including New Zealand citizens arriving from another country, has to go into 14 days of monitored isolation.

"Thus there are no people coming in for vacation, as no one would come here on vacation and stay in isolation for 14 days, and the New Zealand government would not permit it anyway."

The French government is scheduled to make an announcement on the next steps for the country in mid-May, Hamilton said.

Hamilton and her husband recently were booked for two pet/house sitting assignments in France for May and June. The two are scheduled to fly back to Seattle at the end of June and they have pet sitting plans in July and August.

Air New Zealand has stopped almost all international flights, including those to San Francisco and Vancouver, B.C. The airline is operating three flights to Los Angeles, and most of those flights are carrying air freight in the section that used to house passenger baggage. Pancerzewski has booked a flight home at the end of May.

"Hopefully," Pancerzewski said, "by that time things will have opened up more and I hope to not have a problem getting back to Mukilteo."