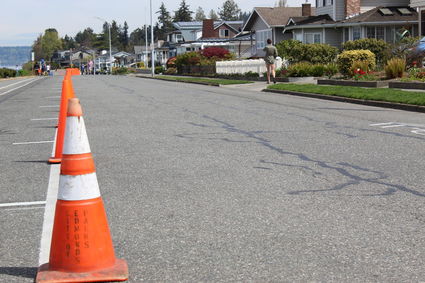 Believe it or not, it's been almost three weeks since Mayor Mike Nelson – with the support of Edmonds Acting Police Chief Jim Lawless – closed Sunset Avenue above the bluffs to through traffic.

As expected, many love the clean air, the no-stereo calm, the safe stroll without getting struck by a hastily opened car door. Or having to look out for speeders.

The day after the April 17 closure, however, it was clear that many drivers expecting to park or cruise Sunset Avenue North were unaware of the restrictions on those dual pleasures, which took effect at noon.

Some heading west on Bell hesitated. Expecting to turn north, they eventually had to swing wide and go back south.

Drivers headed west on Bell Street are forbidden to turn right. One driver just shook his head, swore a bit, and drove off.

The road is not closed for everyone. Local traffic – motorists bound for residences along this stretch of Sunset – are permitted from Edmonds to Caspers streets.

"When the "Stay Home, Stay Healthy" order went into effect, the mayor and the police chief discussed Sunset as a place where people congregated, much the same way they discussed Brackett's Landing and Marina Beach," said Jamie Holter, City spokeswoman.

"He saw people and strollers popping out between cars. His main concern was safety and social distancing – people were social distancing, but not as safely. He talked with the acting police chief and Public Works before making the decision."

Said Nelson: "Due to increased crowds, people have been walking in the street to maintain 6 feet social distance, while drivers are passing through on this already narrow road. With the nicer weather, increased numbers of vehicles and pedestrians were leading to a situation where it seemed like just a matter of time before someone gets hurt."

A large, electronic "no-parking" sign stands at Bell and Sunset. Orange cones are placed east of the walkway, giving walkers an extra 8 to 10 feet of walking space. Local drivers will hug the east curb.

"Parking has also been a problem. Drivers have been parking in non-designated spots," Nelson said. "At times, there were so many cars, it has been bumper-to-bumper and some local residents couldn't get to their driveways."

Still, not all are pleased with the new configuration.

"This is wrong, and I am completely opposed to this decision," wrote Joan Kenton in a public comment to Edmonds City Council. "I was completely shocked to learn that you chose to close Sunset Avenue to allow more people to walk with safe social distancing.

"You are completely discriminating against those who are not fully ambulatory. The parking spots are full because this is the only public place to go near the waterfront and receive the much-needed calm and peace the waterfront provides.

"Your practice of privilege and discrimination gives a whole different meaning to 'An Edmonds Kind of Day.' "

But the no-parking measure is certainly enjoyable for those living on Sunset, who have been known to create a fuss over the cars and noise.

As the sign on Sunset says: "Quiet zone. Use of radios, tape players, musical instruments, and similar devices prohibited if audible over thirty feet away. Alcoholic beverages prohibited."