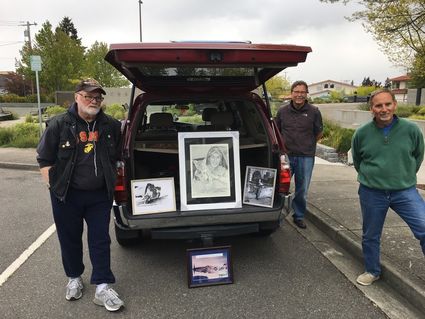 From left: Mike Reagan, Erik Crump, and Bob Crump at a special ceremony May 3 at Edmonds Veterans Plaza.

Every year on Memorial Day, the Edmonds Memorial Cemetery board chooses one or more Edmonds veterans, or groups of veterans to be honored with ceremonies, speeches, music and presentations of memorabilia.

The plan for May 25, 2020, was an observance of the 75th anniversary of the end of World War II, focusing on some specific Edmonds resident veterans of that conflict.

But due to the ongoing coronavirus pandemic, the annual ceremonies at the cemetery have been canceled for this year. The plan now is to push that program planned for this year to Memorial Day 2021.

Meanwhile, as part of the preparation for the event, Edmonds resident sketch artist Michael Reagan prepared a portrait of the late John W. (Wild Bill) Crump, which was to have been presented to Crump's family on Memorial Day.

Crump, who graduated from Edmonds High School, was an Army Air Corps pilot, flying P-40, P-47, and P-51 fighters out of England against Germany, accompanied by his pet coyote, "Jeep."

Those interested can find details of his Air Force career and his many contributions to the Edmonds community, not to mention the story of "Jeep" (to our knowledge, the only coyote ever to fly second seat in an Air Corps combat mission), at a website prepared by his son Bob at http://wildbillcrump.com/.

Since we were unable to follow the original plan, Reagan and a few members of Edmonds VFW Post 8870 gathered (appropriately socially distanced, of course) on Sunday, May 3, at the Edmonds Veterans Plaza.

They presented Reagan's portrait of their father to two of Crump's sons. The portrait is of Crump in the cockpit of his fighter with "Jeep."

We look forward to finishing the job next Memorial Day.

Mike Denton is a member of VFW Post 8870 in Edmonds.