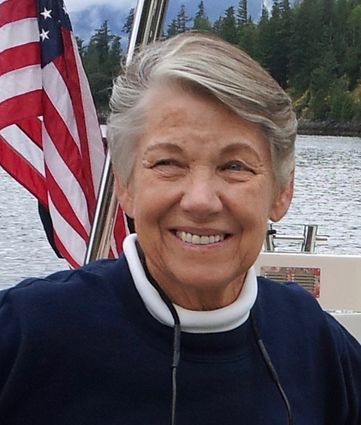 Born on February 13, 1940, Mary Lou grew up in Yakima as the only child of William and Carolyn Fletcher. She enjoyed an idyllic childhood and was doted upon by her parents and three aunts. She was proud to have been a graduate of the first class of Eisenhower High School and was among its first Honor Society members.

Mary Lou was a song leader in high school and she continued to know all the words to every song she ever heard up until the time of her passing from complications of Alzheimer's. To the end, Mary Lou maintained an uncanny ability to draw historical details and the names of everyone dear to her from memory.

Mary Lou married Peter Block in 1962 and they enjoyed an active life together – hiking, traveling, skiing, boating, and raising a family. She was a good sport who was always up for an adventure, especially if there was a Starbucks along the way!

Mary Lou is survived by Peter, as well as her children, Mary Ellin and Daniel (Joanie), and her grandchildren, Connor and Lauren. She had a beloved cat, Suukyi.

Mary Lou was a wonderful wife, mother, and grandmother. Thanksgiving was her favorite holiday because it provided a special opportunity to express her gratitude for all she enjoyed in life, and she hosted beautiful Thanksgiving dinners.

Mary Lou attended Whitman College and graduated from the University of Washington. She had a long and distinguished career in urban planning and earned her AICP certification.

Mary Lou enjoyed her work immensely, both because of the relationships she developed and because she valued public sector service. She went on to become the first woman elected Commissioner for the Port of Edmonds, where she served for 14 years.

Mary Lou was a talented artist. Her favorite medium was colored pencil and one of her drawings was selected for entry in an international exhibition. Mary Lou's drawings were often based on scenes from their travels and her artwork combined her careful attention to detail with her keen eye for design and color.

Our family would like to thank the outstanding staff at Sunrise of Edmonds for their care of Mary Lou. A celebration of Mary Lou's life will be held at a future date. In lieu of flowers, please consider a remembrance to Whitman College or Washington's National Park Fund.

Mary Lou loved the people in her life and was loved by many. She will be deeply missed and so fondly remembered.