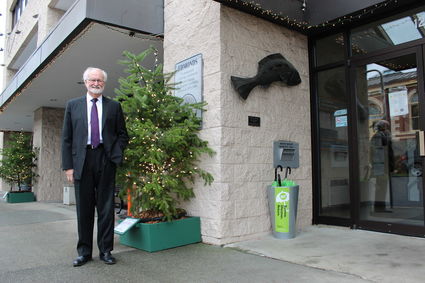 There's no doubt that the coronavirus pandemic is now, or soon will be, taking a toll on municipal coffers, Edmonds' included. Its effects on the economy look to outpace the recession of 2008, which tanked mortgages and led to widespread unemployment.

The recession's effects were still being felt when Dave Earling became Edmonds mayor in late 2011, a seat he held for two terms through the end of last year.

"There's no particular agreement between the circumstances we had then and what the city finds itself in now," he said this week. As 2012 began, Earling had a budget inherited from former Mayor Mike Cooper.

City revenue had been declining or flatlining and was not able to keep pace with the growth in local government expenses.

"This difference, or imbalance, causes an ever-widening gap between revenue and expenses that cannot be addressed with a one-time use of reserves or with the addition of new revenue sources alone," he said in his first State of the City Address in 2012.

Earling quickly decided, after speaking to his directors, that he needed to be much more conservative than the budget he was handed.

"What we did is what I would only characterize it as, 'squeeze it hard during the year.' It set the stage in developing the 2013 budget, where we came in with some pretty dramatic changes that were, again, different than today.

"We could see what was coming and where we were at, based upon the recession."

Earling made some dramatic decisions to cut the City's budget by $1.5 million.

One was asking each director to bring him a budget reduced by 4.5%.

"That may not sound like a lot of money to some people, but it was," said Earling.

"We did some other big chunks, and one I remember was renegotiating the medical contract we had. And I think that saved about $300,000."

By the end of 2013, Earling said the City began to build its reserves again.

This week, Earling said what everyone senses – it's going to take a while to get the economy back up and running.

"With all the stores shuttered down and restaurants just doing takeout – which is minimal to their bottom line – it just seems like the sales tax is already taking a huge hit."

Some good news from the former mayor?

"The good news is the mayor (Mike Nelson) has a good group of directors. And (Finance Director) Scott James will do a fine job. I'm sure Scott will come up with some recommendations and maybe some different levels of a proposal, that sort of thing.

"And I'm delighted that Jim Lawless was just appointed police chief. That's a wise choice because he's been around and he'll be able to blend in. He was around back when we had to make those hard choices in 2012 and 2013."