Cantwell and others call for local media support 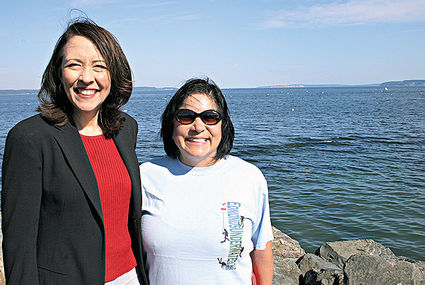 U.S. Sen. Maria Cantwell with Yara Silva in 2017 at an event celebrating the Edmonds Underwater Park at Brackett's Landing North in Edmonds.

As the Senate considers additional measures to support small businesses around the country struggling with the impacts of the COVID-19 pandemic, U.S. Senators Maria Cantwell (D-WA), John Kennedy (R-LA), Amy Klobuchar (D-MN), and John Boozman (R-AR) sent a letter to Senate leadership urging them to ensure any future legislation make thousands of local newspapers, TV, and radio stations around the country eligible for small business assistance under the Paycheck Protection Program (PPP).

Cantwell is an Edmonds resident.

In the letter, the senators called for waiving the Small Business Administration's (SBA) affiliation rule to allow local media outlets to access funding, pointing to the critical role these outlets play in keeping communities healthy and informed.

"Ensuring that local news outlets remain viable at this critical time is not only a matter of fairness, but is essential to public health," the senators wrote. "Local newspapers, radio, and television stations provide important local content that keeps their communities informed. People rely on local newspapers and broadcasters to cover school and business closures, to widely communicate public health guidance, and to combat life-threatening misinformation."

The COVID-19 pandemic has had devastating effects on local media outlets around the country. In the last few months, local newspapers have lost as much as 50 percent of advertising revenue, and the National Association of Broadcasters found that some local broadcasters have reported as much as a 90 percent loss in advertising revenues. Nationwide, advertising losses for local TV and radio broadcasters are estimated to reach at least $3 billion. The crisis has also resulted in an estimated 28,000 news workers being laid off nationwide.

These losses have only increased the financial difficulties many local media outlets have been feeling for years. From 2005 to 2018, newspaper advertising revenue fell from $49 billion to $14 billion, while subscription revenue remained flat. During the same time period, at least 1,800 newspapers went out of business and roughly 28,000 newsroom jobs were lost nationwide.

"Waiving SBA's affiliation rules for local newspapers and broadcasters and ensuring that financial assistance flows to the local affiliate, not the parent company, would allow these small, local operations to be eligible for much-needed financial relief. Local newspapers and broadcasters have been hit hard by the COVID-19 crisis, are essential for maintaining a well-informed public, and deserve our help," the senators concluded.

To support the Edmonds Beacon, go to https://donorbox.org/support-local-journalism-3.