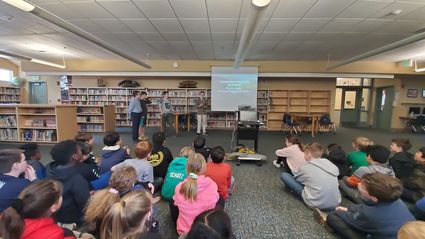 Students from King's and Brighton schools present their findings at the Edmonds Library.

Are you ready for an earthquake in the Pacific Northwest? A group of the sixth graders (Dylan Johnson De Lacy, Noah Anderson, Nolan Walsh, Michael Usoltsev, Noah Hopkins) from King's Schools and Brighton School decided to learn about this possibility.

They started a community-based project with the goal to learn more about earthquakes and educate the community what to do before, during, and after earthquakes. After extensive research, they went to University of Washington's seismology lab to learn facts about earthquake research happening on the West Coast.

The students focused their efforts to educate the community about the possibility of a major earthquake in the Pacific Northwest – and what to do before, during, and after, and how to build an emergency kit.

All Town of Woodway residents received flyers to illustrate the action plan in the case of an earthquake. To spread their knowledge even more, students went to the Edmonds Library to speak up about the issue.

The event was a huge success. All participants also received a sample emergency kit from earthquake insurance representative. Kids also went to their own schools to educate other kids and staff on earthquake preparedness.

In May, the students are going to present the result of their project at Virtual Destination Imagination Competition, a community service challenge, as an official competition had been canceled due to the coronavirus pandemic.

Destination Imagination competition is a global event whose purpose is to inspire and equip students with 21st century skills, creative outlets, and the confidence needed to succeed in school, career, and beyond.

In preparation for the competition, kids created amazing props and wrote a creative story to illustrate their knowledge about earthquakes in an interactive and funny play.

Natalia Usoltseva is a teacher at Brighton School in Mountlake Terrace.