He will also propose temporary loosening of plastic bag ban 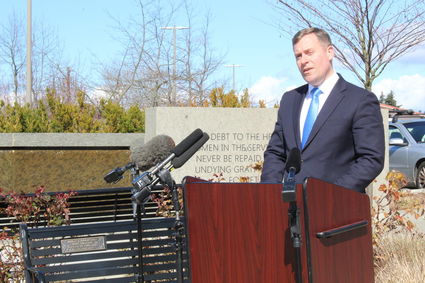 Edmonds Mayor Mike Nelson speaks to reporters this week after ordering a temporary stay-at-home order to help prevent the spread of the coronavirus.

This story has been updated to correct some inacuracies.

According to the City: "The mayor and city attorney are recommending that the city council remove subsection ECC 6.60.090.G from the list of the mayor’s emergency powers."

At the meeting, scheduled at 3 p.m. Friday, March 27, he will ask councilmembers to support an amendment to Section 6.60.090 of the City Code ("Disaster Preparation, Emergency Coordination, and Civil Emergencies") – which lays out items that could potentially be invoked by order of a mayor in case of emergency – by removing the subsection, which relates to "carrying or possessing firearms with intent to do bodily harm."

On social media and in messages to the Edmonds Beacon, numerous readers have contended that Nelson is overreaching and tampering with the Second Amendment's right to bear arms.

The actions approved by council Sunday were meant to be enacted in the event of more dire circumstances.

The gun provision was protested by tax activist Tim Eyman, who disrupted Tuesday's council meeting and forced police to remove him from council chambers.

The City's firearms-related provision forced Acting Police Chief Jim Lawless to release a statement that "no emergency orders, at the local or state level, have been issued suspending open and concealed carry of firearms. Those issues are still governed under RCW 9.41."

Nelson will also ask councilmembers to temporarily lift the City's plastic bag ban, which will allow grocery stores to use plastic bags for the safer handling and take-out of merchandise. Edmonds was the first city in the state to ban plastic bags at certain businesses in the city, which it did a decade ago.

This meeting will be conducted virtually and live¬-streamed on the city's website and on TV21. Council chambers will not be open, in compliance with Gov. Jay Inslee's temporary, partial suspension of the open public meetings act to prevent the gathering of people in a single location.