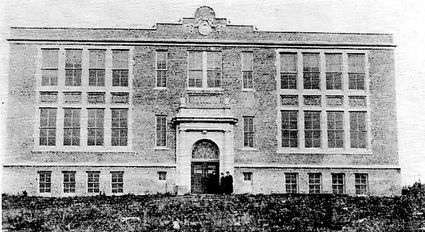 I was a student at the old Edmonds High School – now the Edmonds Center for the Arts – for six years. Yes, you read it right, six years.

No, I was not a slow learner – at one time the Edmonds High School building housed more than a four-year high school. With a shortage of space at Edmonds Grade School, for several years the seventh and eighth grades of the grade school were assigned to continue their schooling at the high school building.

When I entered seventh grade in the EHS building, it was 1939, and the school had just been remodeled from the old red-brick building to the more modern stucco building which most people still remember.

Many years later, before they each graduated from Edmonds Senior High at Holmes Corner (212th and 76th), my four children attended junior high in the former Edmonds High School building at Fourth Avenue North and Daley Street.

Looking back at a bit of school history, Edmonds School District 15 was organized in 1884. However, it wasn't until early 1909 that it was decided that a separate building for a four-year high school was needed.

Until that time, an accelerated high school course in the eighth grade, which was available at the Edmonds Grade School, was the only advanced education course for students in the school district.

The cornerstone for Edmonds High School was laid Nov. 30, 1909, and in May 1910 the first graduating class from the high school consisted of only three students.

Some history that may be mostly forgotten, and perhaps unknown to many newer residents: Edmonds High School was actually part of the history of more than the city of Edmonds. After the first graduation class in 1910, for half a century, it was the only high school in the entire Edmonds School District.

If you lived in the areas that became Lynnwood, Meadowdale, Mountlake Terrace, or Brier, and even Esperance, Seattle Heights and Martha Lake, you would have attended Edmonds High School at Fourth and Daley in Edmonds.

In the early days, it was a long and bumpy bus ride for many students who lived many miles away in the outlying areas of the school district.

There is another fact that makes Edmonds High School stand out in our local history.

In 1911, Edmonds' own personal legend, Frances E. Anderson, graduated from the original high school. Prior to Edmonds High School's opening and becoming an accredited four-year high school, Frances Anderson would have been limited to only the eighth-grade accelerated high school course, which had previously been provided by the Edmonds School District.

She may not have qualified to further her education and for the accreditation needed to become a teacher and school administrator in the more advanced field of education.

Frances Anderson's younger brother, Otto Anderson, who became an attorney in Edmonds and Everett, was in the 1913 graduating class from Edmonds High School.

Betty Lou Gaeng is a historian who occasionally writes about Edmonds and south Snohomish County for the Beacon.