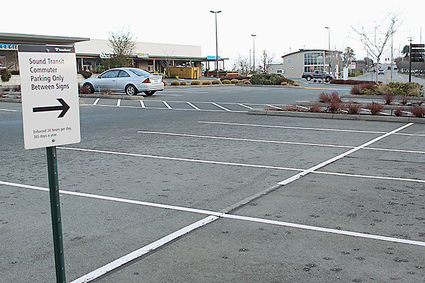 Editor's note: The Beacon will continue to report on how the coronavirus pandemic is affecting our lives in Edmonds, giving the most up-to-date, fact-checked information we can find.

For general information, we recommend the Snohomish Health District, Centers for Disease Control and Prevention, and the World Health Organization. Stay diligent, and be wary of unsubstantiated comments and rumors on social media. Always consider the source.

Look for updates from the Beacon throughout the week at edmondsbeacon.com.

This story was updated Thursday, March 12, with new information.

Go downtown, to Westgate, to Perrinville, to anywhere in Edmonds, and the conversation centers on the same thing: The coronavirus. Schools closing. Events with more than 250 people canceled. Empty businesses. Deaths of our most vulnerable.

Above all, fear of the unknown. An unknown that could stretch for months.

"America this week began to consider the existential threat of a doorknob," the Washington Post wrote last week. It sounded a little funny then. This week, not so much.

Listen to influential host John Oliver on his HBO show: "How scared should you be? The answer is probably 'a bit.' A bit! I don't want to be alarmist here, but I also don't want to minimize what we might be facing."

The coronavirus – which the World Health Organization declared a "pandemic" on Wednesday, March 10 – has arrived in town and, as it is worldwide, is disrupting lives in a big way.

On Monday, March 9, Mayor Mike Nelson announced that Edmonds had received the first confirmation of a resident testing positive for COVID-19, the disease caused by the new coronavirus, which does not have a vaccine.

Following direct communication with the Snohomish Health District, Nelson said he learned that the infected resident is under quarantine.

"The Snohomish Health District won't be publicly releasing any additional information on the case at this time," said spokeswoman Heather Thomas, who added that the age and gender of the individual would also not be released at this point.

"However, disease investigators are working on the case and will contact any individuals identified as 'close contacts' directly."

Said Nelson: "Edmonds residents are reminded that through reasonable precautions, such as social distancing, hand-washing, cleaning and disinfecting surfaces, and staying home if you are sick, we as a community can help slow the spread of this virus."

So we all need to take precautions, the ones you've heard on a loop: Wash your hands with soap and water, yes. If you feel sick, stay home – and call your doctor.

State of emergency in Edmonds

Following a March 5 news conference with Snohomish County and Snohomish Health District officials, Mayor Nelson signed a proclamation declaring a state of emergency in the City of Edmonds in response to increasing impacts of the COVID-19 outbreak in Snohomish and King counties.

Gov. Jay Inslee declared a state of emergency in Washington state three days before that. On Wednesday, he announced a restriction of gatherings of more than 250 people in Snohomish, King, and Pierce counties.

Edmonds' emergency declaration allows for the suspension of normal procedures related to procurement and work assignments, may help with potential receipt of state or federal funds, and will allow the City maximum flexibility to respond to the developing situation.

"I recognize that the declaration of emergency may seem alarming to some, but it has been made out of an abundance of caution and need for interagency coordination," said Nelson.

He said the City is taking the following actions:

– All City-sponsored, nonessential large meetings or gatherings are canceled until further notice.

– Effective Saturday, March 7, all City of Edmonds recreation programs and rentals were canceled for a minimum of two weeks. The following City facilities are closed to the public: Frances Anderson Center, Meadowdale Clubhouse (and preschool), and the Edmonds Plaza Room.

– All City buildings are being deep cleaned by custodial staff on a regular basis.

– Entrances to City buildings and facilities now have hand sanitizer stations, and all visitors and staff entering those buildings must use the sanitizer.

– Teleworking is being promoted among City staff able to do so for all or part of their regular work hours.

– Flexible application of sick leave policies is being allowed to account for individualized needs.

– The City activated its emergency operations center to ensure effective communication and coordination with county, state and federal authorities.

"Please follow the recommended precautions as you go about your daily lives at work, school and in the community," Nelson said.

"In addition, I encourage all members of the public to be respectful to others they encounter in the community who may be dealing with the outbreak in different ways. I am confident that the measures and precautions we've laid out will help contain the spread of this virus and allow us to return to normal in the near future."

In addition to hijacking conversations and headspace, this new virus has given our vocabulary new phrases – "social distancing," "presumptive positive," and "elbow bump," among others.

Beyond personal and public health concerns, there's the economic downturn when patrons steer clear of restaurants, which is real and happening in Edmonds and surrounding cities.

Others had plenty of empty tables. 407 Coffee reduced its hours due to a "major drop in traffic."

Crowds were busier over the weekend.

Churches haven't escaped. On Sunday, Edmonds United Methodist Church and North Sound Church decided they didn't want anyone at its regular Sunday services. They instead urged worshippers to join them online.

Businesses may see a slowdown, but residents and visitors are still out and about. Last Sunday, under a sunny sky, there were a fair number of people taking advantage of the Edmonds waterfront, from Brackett's Landing North to Marina Beach.

Longtime Edmonds resident Bob Mazelow was one. He sat on a bench at Marina Beach near the off-leash dog park.

"I get impacted by seasonal affective disorder," he said. "I've gotta be in the sun. I think we're getting to a place where we're understanding more about the coronavirus. Yes, you should be cautious. But you can't overdo it."

The Edmonds School District on Wednesday decided to close all schools Monday, March 16, through at least Friday, April 10.

Before that, on March 9, the district suspended community events through April 12.

That included all sporting events and all events in district facilities and on fields led by community partners, and all after-school activities led by outside groups. It's the same for concerts, dances, plays, and informational nights for parents and guardians.

"We know this situation is unsettling, and we continue to put the health and safety of our students and staff first," said Superintendent Kris McDuffy. "It is important to note that there are no confirmed cases of COVID-19 in the Edmonds School District at this time (as of 5 p.m. Wednesday, March 11)."

The district has opened its Emergency Operations Center. A central location and process will coordinate all district decisions and communications as the school district continues to work with and take direction from the Snohomish Health District.

The Edmonds School District board meeting scheduled Tuesday, March 10, was postponed to March 24.

Meanwhile, almost 25,000 people have signed a change.org petition to close all schools in the Edmonds School District.

King's Schools in Shoreline, which includes a sizable number of students from Edmonds and Woodway, decided to move to a remote learning platform for students through March 27, the final day of school preceding spring break.

"While there are zero instances of an individual being diagnosed or suspected of COVID-19 on our campus," said a spokesman from King's, "we have continued to evaluate and execute preventative measures aimed at proactively keeping everyone on our campus safe – this includes our students and teachers of King's, as well as Crista Senior Living residents and Christa Ministries staff.

"Our teachers went through remote learning training last week and are ready for this plan to be put into motion."

Based on the recommendations of the Snohomish Health District and Snohomish County and its own risk assessment to slow the progress of the coronavirus in the greater community, Edmonds Community College remains open as of the Beacon's deadline, but is taking the following measure:

All campus events – including non-Edmonds CC hosted events – with an expected attendance of 50 or more people, were canceled as March 5 until further notice. This includes but is not limited to Triton Athletics events and events to be held in the Black Box Theatre and Seaview Gym.

The library remains open during regular hours, although Under the Rainbow Storytelling and Music at the Library have been canceled for March.

Each of the 23 Sno-Isle libraries and the Administrative Service Center are cleaned daily, library officials said.

"We are now doing a deeper cleaning of all library facilities," said Lois Langer Thompson, Sno-Isle Libraries executive director. "Janitorial crews are disinfecting all public area counters, horizontal surfaces, equipment, staff areas and restrooms each night. Sanitizing gel and wipes are being made available for staff and customers."

Early literacy toys, normally available within the children's area of the library, have been removed until further notice. This action follows review of recommendations by health officials to child-care centers and is being done for cautionary reasons.

On March 5, the Edmonds Senior Center decided, out of an abundance of caution, to suspend all programs and activities until further notice.

"Seniors are one of the highest at-risk groups," Edmonds Senior Center CEO Farrell Fleming wrote in a statement on its website.

"In consideration of our priority for member safety, we believe this is the appropriate response. One of the factors in our decision is that, unlike every other Senior Center in the county, we are spread over 14 different transition locations, and thus are not in control of maintenance and custodial operations.

"We will monitor the situation continuously and keep the community informed. The administrative office and the board and committees will continue to function."

The thrift store in Westgate is also temporarily closed.

Many events planned in Edmonds have been canceled or postponed, including a Cascade Symphony Orchestra concert scheduled March 9 at Edmonds Center for the Arts.

"We are taking this action based on recommendations by the health departments of King and Snohomish counties to postpone large events and gatherings, in an effort to protect the health of our audience and musicians," said Rose Gear, Cascade Symphony executive director.

"We are currently working to find an opportunity to present this program at a later date and will share details as soon as they are available. Any tickets purchased will still be valid at a rescheduled concert."

Cascadia Art Museum, meanwhile, canceled or postponed all museum events through March 31, which was in line, it said, with public health officials' recommendations on social distancing.

Among the cancellations are public tours, music in the museum, and two exhibits that were scheduled to open later this month: "Washington's Undiscovered Feminists with Mayumi Tsutakawa" and "Collecting 1900 Modern with Lawrence Kreisman."

The Madrona Children's Theater production of "Annie," scheduled this weekend and spotlighted in last week's Beacon, was postponed due to coronavirus concerns.

Edmonds Methodist Church canceled its March 14 screening of "Alive Inside," part of its "Meaningful Movies" series. 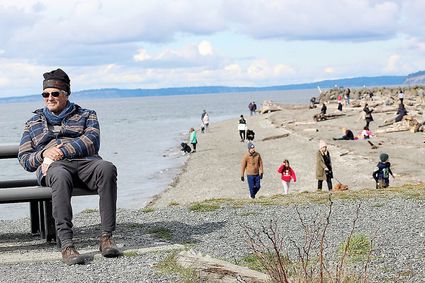 Bob Mazelow enjoyed the sun on Sunday from a bench at Marina Beach. "I think we're getting to a place where we're understanding more about the coronavirus. Yes, you should be cautious. But you can't overdo it."