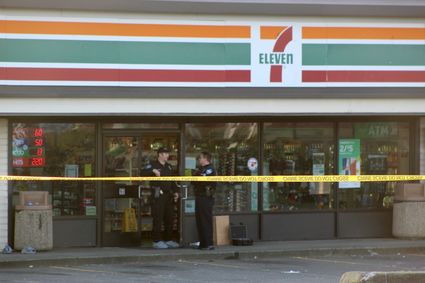 Edmonds police officers at 7-Eleven on Feb. 21 after a homicide.

Edmonds police Sgt. Josh McClure announced toay, March 15, that – with the help of the Metro SWAT team and local authorities in Enumclaw – two people of interest were taken into custody related to the Feb. 21 homicide investigation at 7-Eleven on Highway 99 in Edmonds.

A vehicle of interest was also seized as possible evidence. Both of the suspects were already wanted by the Department of Corrections. They were ultimately booked into the Snohomish County Jail, McClure said.

Detectives will be continuing their investigation today. This is a developing situation and more information will...