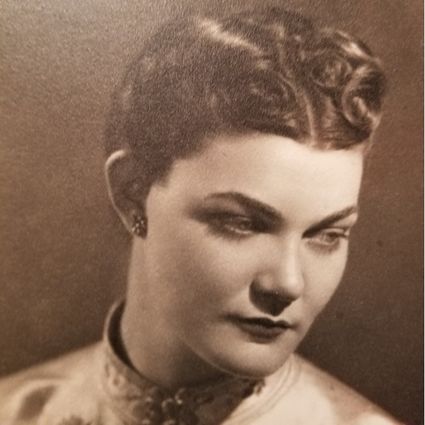 Frances Ann Sabine, 97, passed away peacefully in her sleep at Fairwinds at Brighton Court in Lynnwood, Washington, on March 9, 2018.

She is survived in death by her daughter, Joyce Behncke, of Edmonds and her partner, Joe Spitz, also of Edmonds; her niece, Mrs. Linda Bond, of Tampa Bay, FLA, her nephew, Jerald Corbett Bond, of Vancouver, WA; and several great-nieces and nephews.

She is preceded in death by her parents, Harold Corbett Strother, originally of Ripon, CA, a decorated World War I soldier and 40-year resident of Weed, CA, who died of injuries sustained in a car accident in 1968 at 72 years old; and her mother, Cecelia Ann Murphy Strother, originally from Ripon, who died of natural causes at the age of 94 in Oak Harbor, Washington.

Fran Sabine was born in Ripon in 1920, where she attended the St. Mary's Convent in Stockton and received her nursing training at Mary's Help Hospital in San Francisco. She was affiliated with Alpha Phi Omega sorority.

She worked in the medical practice of Dr. Michael Lipp until she and a girlfriend took the competitive entrance exam to become a police officer. Fran Sabine became one of two of the first female patrolmen for the city of Sacramento in August 1948. They were assigned to the juvenile division, but available to all departments for special duties.

There were no standard uniforms for women yet. The two women had to pass the same monthly proficiency tests in marksmanship and other law enforcement duties that was required of all male patrolmen. Fran recalled her law enforcement experience as "educational and broadening," that it had given her a "much wider outlook."

Fran married William Orine "Bill" Behncke a year later and her only daughter, Joyce, was born in 1951 in Reno, Nevada. Fran went on to have a rewarding career in medical office operations, and worked for Dr. James Botsford for many years. She even taught medical billing practices at the community college level.

In 1964 she married Rex Sabine, from Leeds, England, a pharmaceutical representative. She and Rex traveled the world together and eventually settled in Oak Harbor, Washington.

Fran became a master gardener and wrote weekly gardening columns for the Whidbey News-Times for several years. Rex was very involved in the Whidbey Island Masonic Lodge. He died of esophageal cancer on January 14, 2003.

Fran loved good food, good drink and sharing them with good friends. She looked forward to her birthday celebration every year when friends and family would come from Florida, Nevada, and Oregon.

She lived a big, full life and will be dearly missed.

The Neptune Society handled all arrangements. Fran's ashes were scattered at sea in April 2018.