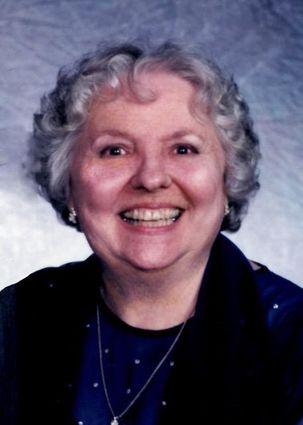 Nancy was born October 25, 1929, in Los Angeles CA, and was raised in Hollywood. She graduated from University of California-Santa Barbara and received her Masters of Science degree from the University of Southern California. Nancy taught Jr. High School in Santa Monica. She married Dr. Ralph Bell, who was Superintendent of Schools in Saugus, CA, and also in Big Bear Lake, CA.

She always believed in community involvement and has participated actively without pay for over 35 years in numerous community activities, such as volunteer worker for the Cancer Crusade, U.S.O., Mentally Disabled, Y.M.C.A., 4-H Club and Cub Scouts.

She has been listed in the book "Personalities of the West and Midwest" and also in the Marquise book "Who's Who of American Women" for the years 1999-2000 for lifelong devotion to helping others. She has always been very patriotic, and is a life member of the Daughters of the American Revolution and the General Society of Mayflower Descendants.

She is also survived by her grandchildren David Bell, Elaine Douglass (James), Curtis Bell (Annie), Martha Riley (Joseph), James Harris, Jr., Linda Winder, and Ryan Winder. She took great pride in her children, grandchildren and eight great-grandchildren. She was so proud of all of them.

She was a soft, caring and compassionate person who lived life to the fullest with a smile, and who loved people and animals. She tried to give love, understanding and encouragement to everyone she met. She never met a person she did not like.

Nancy enjoyed traveling all over the world with her husband after they retired, and she was a avid reader, reading five or six hours a day, as she believed learning was a continuous process. She loved music, collecting antiques, and genealogy. She enjoyed going into her backyard each day, feeding many birds, squirrels, raccoons and visiting neighbor pets.

Arrangements by Becks Funeral Home, Edmonds, Washington. Private services will be held at the Edmonds Memorial Cemetery. Remembrances may be made to the American Lung Association.