A balanced scoring attack and relentless defense lifted Edmonds-Woodway past arch-rival Meadowdale in a 3A District 1 quarterfinal boys basketball game.

Three players scored in double figures to lead the Warriors to a 69-45 victory over the Mavericks Saturday, Feb. 15, at Edmonds-Woodway High School.

The numbers put a smile on the face of Edmonds-Woodway coach Robert Brown.

“Balanced scoring is something that I thought we would have all season,” he said. “It was good to see it come to fruition today.”

Meadowdale suffered a crushing blow late in the first quarter when senior Colton Walsh appeared to injure his knee. Walsh, the team’s top scorer, left the game at the 2:46 mark of the first quarter and did not return the rest of the game. He was on crutches after the game. Walsh has battled leg injuries throughout his basketball and football career at Meadowdale. He’s endured surgeries on both knees and missed most of last season.

Mavericks coach Roger O’Neill said that it is unlikely Walsh will be able to play this week.

“It’s really unfortunate,” he said. “Mostly, I just feel terrible for him.”

Edmonds-Woodway (15-6) led 22-14 at the end of the first quarter and extended its lead to 39-22 at halftime. Meadowdale cut the deficit to 11 points midway through the third quarter, but that was as close as the Mavericks would get the rest of the contest.

“It’s huge to get that first win at districts,” Brown said. “It does give you a little breathing room.”

Mutdung Bol noted that Meadowdale has defeated Edmonds-Woodway the last two times the teams met – during the regular season this year and last year.

“We just clicked as a team,” Bol said. “We moved the ball. We attacked and when we attacked, we took the right shots. We trusted each other at the end of the day. That’s what Woodway basketball is, and that’s how we got this W.”

“I was really proud of the way we battled,” O’Neill said. “Down Colton, it’s going to be tough. Our guys competed. … We had too many turnovers. They had too many offensive rebounds, and so ultimately that’s the basketball reasons why we lost. But we kept fighting until the final buzzer.” 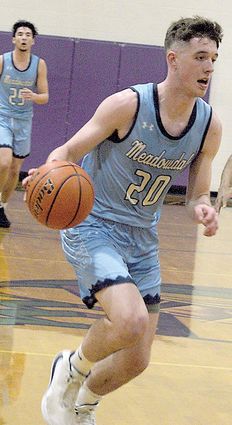 Edmonds-Woodway was scheduled to face Wesco 3A champion Marysville-Pilchuck in a semifinal game on Wednesday, Feb. 19, while Meadowdale was set to host Squalicum in a loser-out game after the Beacon’s deadline.

Acholonu credited Edmonds-Woodway’s defense for the victory. Defense is going to determine how far the Warriors go.

O’Neill has no doubt the Mavericks will be ready to go this week.

“They’re a resilient group,” he said. “We’re not going to give up. You’ve got to win three in a row. But you can only do that one at a time.”