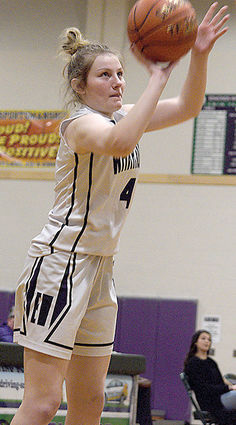 Senior Jaydn Waram scored a game-high 16 points to lead the Warriors to a 59-34 victory over Marysville-Getchell in a loser-out 3A District 1 tournament game Tuesday, Feb. 18, at Edmonds-Woodway High School.

The Warriors (12-10) were coming off a 66-53 loss to Ferndale in a first-round district contest. The Chargers defeated the Warriors 40-34 in a mid-January regular-season matchup.

Waram said the Warriors focused on upping their intensity in the rematch with Marysville-Getchell.

“We wanted to get to every 50/50 ball and put out a 110 percent effort,” she said. “We were not focusing on one person. We were just focusing on the team.

“We came into the game thinking this is a really hard opponent. We needed to be playing like this is the last game that we will ever play because it could have been if we didn’t play well. We had to execute, and that’s what we did.”

Senior Maddie McMahon scored 7 of her 9 points in the first quarter to help the Warriors take a 17-7 lead. Edmonds-Woodway extended the advantage to 27-13 on a buzzer-beating 3-pointer by senior A.J. Martineau.

Waram scored 7 of the Warriors’ first 9 points to start the third quarter and Edmonds-Woodway maintained a 16-point or greater lead for the rest of the contest.

“Everybody was looking for other people,” Waram said. “Nobody cares about scoring themselves. We have a lot of unselfish players, which really helps us contribute to winning.”