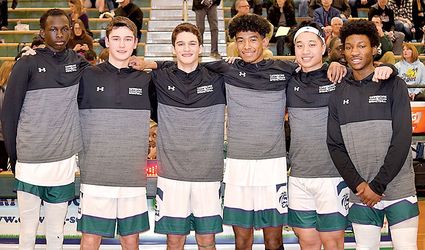 Edmonds-Woodway is on a roll.

The Warriors wrapped up the regular season with its fifth victory in six games by downing Cedarcrest 68-51 in a Wesco 3A/2A boys basketball game Monday, Feb. 10, at Edmonds-Woodway High School.

The victory moved Edmonds-Woodway into third place among the 3A teams in the league and means the Warriors host arch-rival Meadowdale in a first-round district playoff game at 7 p.m. Saturday, Feb. 15.

The Mavericks lost their final regular-season game to Archbishop Murphy 50-40 and ended up as the league’s No. 5 seed.

“I felt pretty good about the way the guys clos...