Warriors' defense too much for Royals | Girls basketball 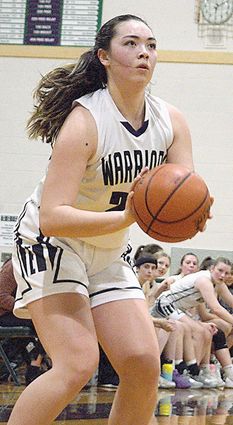 Edmonds-Woodway is known as an offensive team.

But against district rival Lynnwood, the Warriors’ defense proved to be the difference.

Edmonds-Woodway limited the Royals to their third-lowest offensive output of the season in a 58-35 victory in a Wesco 3A girls basketball game Friday, Jan. 31, at Edmonds-Woodway High School.

“I look at our defense and we worked our tails off,” Warriors coach Jon Rasmussen said. “We hustled well tonight and we had a game plan against Nakia (Boston). She’s a great player. We shut her down for a while. … We just played great team defense and that was the key. The offense followed the defense.”

Boston, who had been averaging 25.1 points against her Wesco 3A rivals, scored 20 points while being hounded by senior Mia Dickenson and junior Kaddy Kongira.

“We rotated them,” Rasmussen said. “We know that we’ve got to shut her down to have some success.”

Edmonds-Woodway (8-4 in the league, 10-8 overall) jumped out to a 16-9 lead after the first quarter but saw Lynnwood cut the lead to 18-14 late in the second quarter. Senior Maddie McMahon then hit a 2-point shot and closed out the first half with a 3-pointer to extend the lead to 23-16 at halftime.

“We didn’t capitalize in the first half,” Rasmussen said. “We had a lot of steals. So we talked at halftime that when we steal the ball, we want to attack, and we got a little more aggressive attacking the hoop.”

The Warriors opened the third quarter with a 7-2 run and eventually took a 39-23 lead into the final period. Five different Edmonds-Woodway players scored.

“Everyone on our team has the green light to shoot,” McMahon said. “Tonight we took advantage of that and everyone was looking for their shots and I think we were able to knock down a pretty good amount. I was feeling a lot more confident tonight.

“Our defense was really good and that created a lot of our options.”

Rasmussen said that having the offense spread out continues to be a strength for the Warriors. The emergence of 6-foot freshman center Halle Waram, Jaydn’s younger sister, gives Edmonds-Woodway even more offensive options.

“Everyone’s contributing. You can shut down one, maybe two, but we’ve got more than one or two weapons. We’ve got multiple weapons,” Rasmussen said. “Jadyn’s been our leading scorer. Her sister came in and hit some big shots in the first half.”

McMahon added that it’s been a while since the Warriors have had a true post player like Halle Waram.

“Halle’s doing a great job stepping up and being that post player,” McMahon said. “She was really confident taking the ball to the hoop and using her size to her advantage.”

Rasmussen isn’t concerned that she’s only a freshman.

“We can call her a freshman, but she’s just another player for us,” he said. “We haven’t really had a post presence before this year and she gives us a new element.”