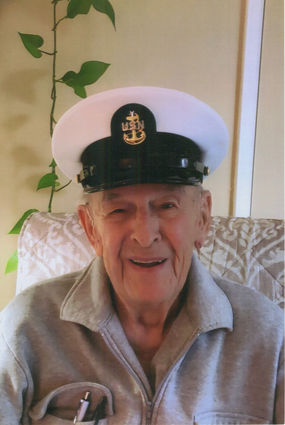 Edgar passed away peacefully on January 27, 2020, at his home in Edmonds, Washington, of natural causes, surrounded by family.

Born July 4, 1918, in Trafford, Pennsylvania, Edgar (Ed) was a very happy person, with a dry sense of humor, who loved to joke and tell stories. Throughout his life, Ed had a penchant for taking things apart and putting them back together. After graduating from Trafford High School, in Trafford, PA, Ed worked at Mesta Machine, a company that made the guns used on Navy ships.

After the Japanese attack on Pearl Harbor, Ed enlisted in the U.S. Navy, trained as a Fire Control man and was assigned to the USS Helena (CL-50). The light cruiser was sunk July 6, 1943, in the Battle of Kula Gulf, while protecting other ships during the Guadalcanal Campaign in the Solomon Sea; 170 of the crew of 900 perished. Ed survived by clinging to a life raft, and was instrumental in keeping other sailors alive by his calm and reassuring demeanor.

After his rescue at sea, Ed was assigned to the USS Louisville (CA-28) where he utilized his systems knowledge and analytical skills to resolve/correct a targeting control system problem, which greatly enhanced the accuracy of the ship's 8" guns, for which he was awarded the Navy Commendation Medal during his service.

While in the U.S. Navy, Edgar met and married the lovely Opal Stone. They welcomed a beautiful daughter, Virginia Evelyn Shepherd.

After the war, he returned to Mesta Machine to complete his contract. Then he worked for Square D and Catalina Swimwear in California. During this time, he met and married Marilyn Ruth Rogers. When Edgar retired, they moved to Edmonds, Washington.

A totally devoted husband, he was his happiest when he and his wife were together, whether dancing, bowling, golfing, traveling, playing cards or games; he loved doing it all with her. Later in life, he especially liked going out to eat, where he could talk about his life without competing with a television or telephone.

He is survived by his daughters Virginia E. Shepherd of San Gabriel, CA.; Paula Kilbourne Beattie of Edmonds, WA; Debra Pilgrim of Gainesville, GA; and son Bruce Heisley of Dunedin, FL; 6 grandchildren; 10 great-grandchildren; 2 great-great-grandchildren; a brother, Thomas G. Shepherd of Capon Bridge, WV, as well as numerous nieces, nephews and dear friends with whom he was most thankful to share many years.