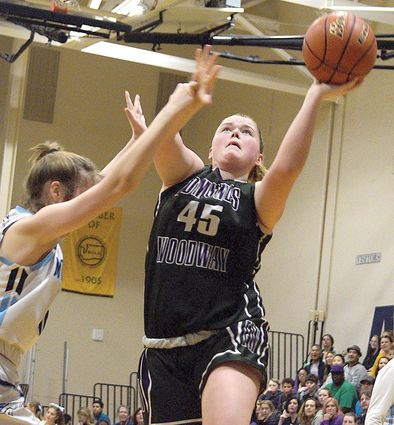 Edmonds-Woodway's Halle Waram goes up for a shot while being defended by Meadowdale's Maia Austvold Friday, Jan. 25, at Meadowdale High School.

Edmonds-Woodway needed a victory in the worst way.

The Warriors were in the midst of a three-game slide with losses to Arlington, Marysville-Getchell and Archbishop Murphy.

Compounding matters was that their next opponent was one of the teams near the top of the league – district rival Meadowdale.

But whatever questions Edmonds-Woodway had coming in appeared to be answered, as the Warriors used a tough defense to stifle the Mavericks in a 49-45 victory in a Wesco 3A girls basketball game Friday, Jan. 24, at Meadowdale High School.

Edmonds-Woodway coach Jon Rasmussen liked just about everything he saw from the Warriors against their archrival.

"I think we're starting to catch our stride again," he said.

The Warriors (7-3 in the league, 9-7 overall) had won seven straight games before the loss to the Eagles on Jan. 16.

"I feel like we're back where we were," Rasmussen said. "Meadowdale is a great team. They were ahead of us and we took them out, and we'll keep climbing the ladder. We want to get back up to the top."

Edmonds-Woodway extended its 14-12 first-quarter lead to 28-17 at halftime. Senior Jadyn Waram scored 9 of her game-high 16 points in the first half.

Meadowdale (8-2, 12-4) was hampered by the absence of junior center Fatoumah Jaiteh, who picked up her second foul early in the first half and spent most of the second quarter on the bench.

"That hurt us," Meadowdale coach Arie Mahler said. "So much of our offense goes through her. She's our strongest rebounder and one of our best defenders. That changed things quite a bit."

A 3-pointer by senior Mia Dickenson gave the Warriors a 34-17 lead early in the third quarter and Edmonds-Woodway headed into the final period with a 39-25 advantage.

Senior Brooke Kearney credited the lead to the Warriors' half-court and full-court defense.

"We were taking away their shooters and playing good post defense," she added.

Jaiteh finally got on track offensively early in the fourth quarter, scoring 8 of her team's first 11 points. She led the Mavericks with 14 points.

A putback basket by Meadowdale senior Alicia Morrison cut the Edmonds-Woodway lead to 43-39 with 1:30 left in the game.

The Warriors then were taking time off the clock, and just as the shot clock was winding down Kearney sank a 3-point shot that extended the lead to 7 points and shifted the momentum back to Edmonds-Woodway.

"We were trying to take time off the clock because we didn't want them to score," said Kearney, who finished with 13 points. "As the clock was running down, I just let it fly."

Senior A.J. Martineau followed with two free throws to give the Warriors a 48-39 lead with 43.7 seconds remaining.

"It was a little too much to overcome," Mahler said.

The Warriors kept their poise during the Mavericks' fourth-quarter rally.

"We just tried to stay calm throughout the whole thing and not get panicked," Kearney said.

Rasmussen noted that he went with his starters for most of the second half. 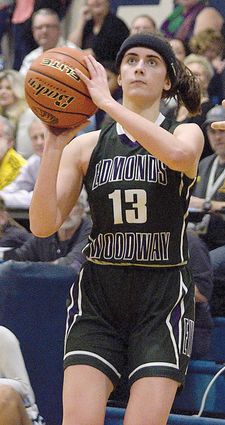 Edmonds-Woodway's Jadyn Waram prepares to shoot the ball against the Mavericks.

"At the end, we were tired," he said. "I rode my starters to the very end. That kind of cost us. ... We kind of played a little too cautious toward the end. But I'm not complaining. It's a win."

Mahler said that the Meadowdale's struggles with its free throws really hurt. The Mavericks uncharacteristically made only 5 of 14 free throws in the game.

"All in all, missed free throws played a huge role," Mahler said. "It was a little bit of a surprise that we shot so poorly. That's a great teaching moment. We've got to get some more reps."

After a 1 for 10 performance at the foul line in the fourth quarter cost the Warriors in a 44-40 loss to Archbishop Murphy, Edmonds-Woodway made 3 of 7 in the final period.

"Everyone participated in the whole game. It just wasn't one person," Kearney said. "I think it's coming together really well. We can't take any days off. We've got to keep working hard."