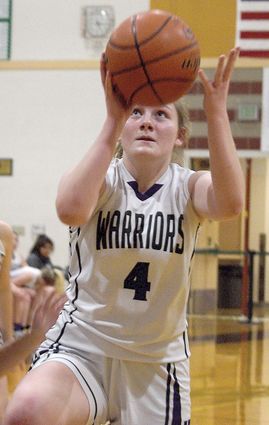 Senior point guard A.J. Martineau made sure that Edmonds-Woodway started out the new year the right way.

Martineau scored a game-high 19 points and connected on eight of eight free throws in the final minutes to lead the Warriors to a 58-48 victory over Sequim in a nonconference girls basketball game Thursday, Jan. 2, at Edmonds-Woodway High School.

Since opening the regular season with four losses, Edmonds-Woodway (4-0 in the league, 6-4 overall) has won six straight contests, including a 42-28 victory over Everett in a Wesco 3A clash Tuesday, Jan. 7, at Everett High School.

The victory over the highly regarded 2A Wolves (7-3) in the first game of 2020 helped boost the Warriors.

"I think these games are really important to us because we lost the first four games at the beginning," Martineau said. "So I think it's a little bit of redemption for us and it feels good to get a win. It just is good for preparing us for the league games."

The Warriors beat Wesco 3A rivals Stanwood and Marysville-Pilchuck in mid-December and wrapped up 2019 with a win over Ferndale on Saturday, Dec. 21.

The 11 days off between the Ferndale and Sequim games was somewhat of a concern for Edmonds-Woodway coach Jon Rasmussen.

The Warriors, however, had quality practices after Christmas.

"I came into this feeling like we didn't have any days off," Rasmussen said. "It felt really good. The girls have been working hard and their hard work is paying off."

Senior Jadyn Waram scored 12 points and Mia Dickenson added  8 against the Wolves. Halle Waram led the Warriors with 13 points in a 67-35 victory over Oak Harbor on Friday, Jan. 3. Dickenson and senior Maddie McMahan each contributed 10 points.

Jadyn Waram and McMahon each scored 15 points and senior Brooke Kearney had 11 against the Golden Eagles.

"The thing about this team is we have more than one person that can score," Rasmussen said. "We've probably had five different lead scorers, which makes this team tough. So that's the exciting thing about it."

Martineau added that she hasn't felt the need to produce more offense this season.

"I just feel I get put in these situations and my teammates gave me good passes and I just make the shots when we needed them," she said. "I always have confidence in my teammates to shoot the ball."

Edmonds-Woodway led Sequim 30-25 at halftime and saw the lead cut to 1 in the third quarter.

A pair of free throws by McMahan extended the Warriors' advantage to 47-36 in the fourth quarter, but Sequim used an 8-3 run to draw to within 6 points – 50-44. Sequim then started fouling Martineau. 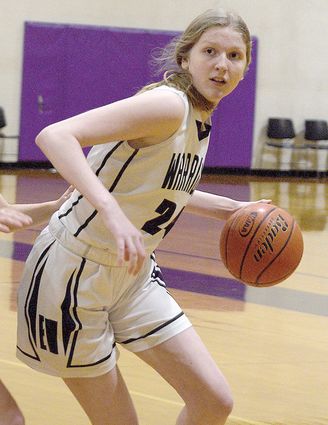 Edmonds-Woodway's Lilly Frunk dribbles the ball against the Wolves.

"We just stayed confident. We didn't get down on ourselves at all," Martineau said of Thursday's victory. "We played really composed. I thought we moved the ball well and we just took really good shots when we needed to."

An overtime loss to 4A powerhouse Lake Stevens in mid-December may have been a turning point for the Warriors.

"We found some momentum after the Lake Stevens game," Rasmussen said. "It could have gone either way. That kind of got us some confidence and got the ball rolling in the right way."

Martineau agrees that the Warriors have made major strides since last month.

"I think the beginning of the season was tough," Martineau said. "We had a lot of new starters, new offense. It was just a new dynamic and I think we're just starting to come into our game. We've been playing really well recently."