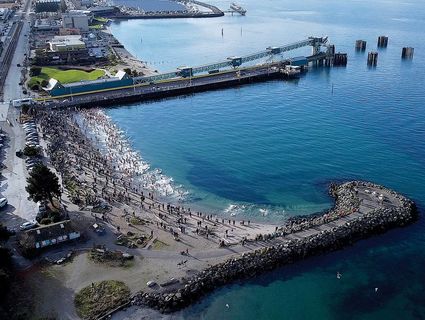 Phillip Borchert took this image of the beginning of the plunge into Brackett's Landing North in Edmonds.

What started with just a few adventurous Edmonds residents – fueled by Rainier beer and wrapped in white bathrobes – has now grown into a top regional event in south Snohomish County.

He was inspired by a 1930s photo hanging in the Main Street bar picturing the Edmonds Uplift Society, a drinking club formed during Prohibition.

For the first 10 years, the Edmonds Uplift Society sponsored the event, which begins at Daphnes and ends at the park.