A look back at the elite athletes and teams of 2019 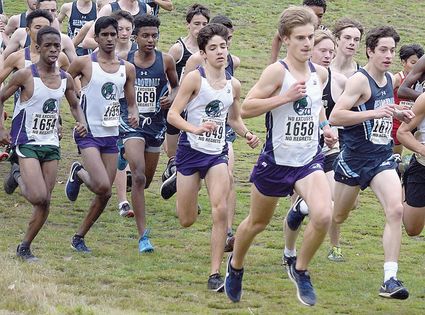 Edmonds-Woodway, Meadowdale and King's athletes left quite an impression on prep sports fans during the second half of 2019.

The King's volleyball advanced to the 1A state finals before falling to Chelan.

Edmonds-Woodway's football, girls soccer and volleyball team all qualified for the postseason.

You can take the interim label off of James Harmon's official job title.

In addition to his defensive coordinator duties, Harmon also has been a position coach on both offense and defense. He coached the offensive line during the Mavericks' run to the state semifinals in 2016. He also has worked with just about every position on the defensive side.

Theft of wiring leaves football teams in the dark

The Edmonds School District is working closely with the Edmonds Police Department following a copper wire theft incident that left the Meadowdale/Lynnwood high school football game in the dark, forcing it to be rescheduled.

On Friday, Sept. 20, the Edmonds School District Stadium lights on the west side of the field would not turn on for a scheduled 8 p.m. football game between the Mavericks and Royals.

"This had to have happened between Thursday night and probably Friday morning, because the lights worked for night time sporting activities Thursday evening," Edmonds Police Sgt. Shane Hawley said. "This is a burglary investigation because the entire area is enclosed by a fence."

A hard hit by a Glacier Peak defender on the first play from scrimmage knocked Carr out of the season opener and put his season in jeopardy. It was initially thought that Carr had broken his wrist.

But fortunately the injury turned out to be less serious and Carr made a triumph return to the gridiron, throwing for one touchdown and running for another to lead the Warriors to a 27-13 victory over archrival Meadowdale in a Wesco 3A South clash Friday, Sept 27, at Edmonds Stadium.

"It feels awesome," Carr said. "Everyone played amazing. We kept the energy high. ... I was so nervous coming into this game. My stomach was in knots. I have so many friends on Meadowdale. It brings back memories of backyard football playing with my buddies."

No Meadowdale team was listed among the winners dating back to 1974 on the trophy hoisted by the Mavericks at the end of the meet. The district does not have any records prior to 1974 and Meadowdale athletic director Beth Marriott indicated that it is her understanding that the school has never won the Edmonds School District meet.

Lynnwood's Nicolas Desgrippes defeated Fernandez 6-4, 2-6, 6-4 in the finals. Both advanced to the 3A state tournament.

Meadowdale's Ben Fahey and Chase Harmon finished third in the doubles tournament and earned a berth to next spring's state tourney. The Maverick duo defeated Russell Anderson and Zach Forman of Edmonds-Woodway 6-3, 6-2 in the third-fourth place match.

Some second-half adjustments and superior conditioning lifted King's to a league championship.

Sophomore quarterback Hayden Teeter threw a pair of touchdown passes to senior wide receiver Davis Campbell and the Knights' defense shut out South Whidbey in the second half as King's prevailed 28-18 in a North Sound Conference football game Friday, Nov. 1, at Woolsey Stadium.

The victory clinched the league title for King's (3-1 in the league, 4-5 overall), who overcame an 0-4 start to claim their first league championship since 2015.

Smith, who won the state title last year, finished the 5k course in 18 minutes, 24.00 seconds, behind winner Alaina Stone of Colville, who clocked in at 17:39.60, the second fastest time of her career. The Knights finished sixth in the team competition.

Meadowdale and Bellevue both wanted to establish their running game.

The Wolverines won the battle on both sides of the line with an offense that did not punt the ball the entire night and a defense that largely contained the Mavericks.

Bellevue advanced to the state football playoffs with a 57-21 victory in a week 10 matchup Friday, Nov. 8, at Bellevue High School.

Edmonds-Woodway comes up short against Yelm

The young Warriors stayed right with Sound Sound Conference No. 2 seed Yelm until the Tornados scored two touchdowns in the fourth quarter to pull out a 27-17 victory in a week 10 playoff game Friday, Nov. 8, at Yelm High School.

Trailing 14-10 at end of three quarters, Edmonds-Woodway (5-5 overall) took a 17-14 lead on a 5-yard touchdown run by running back Steele Swinton less than a minute into the fourth quarter. But three minutes later Ben Hoffman ran 44 yards for a touchdown as Yelm retook a 21-17 lead.

Knights run over by Trojans in district playoff contest

King's struggled to gets its ground game rolling and at the same time was at a loss to slow down Meridian quarterback Cameron Webster.

The combination turned out to be far too much to overcome as Webster ran for four touchdowns to lead the Trojans to a 71-30 victory over the Knights in a District 1 football playoff game Saturday, Nov. 9, at Woolsey Stadium in Shoreline.

King's (4-6 overall) finished with only six yards on the ground, while Meridian ran for 493 yards and passed for 288 yards for a staggering 781 total yards.

Edmonds-Woodway came up short in its bid for a third straight trip to the state girls soccer tournament.

Snohomish shut out the Warriors 2-0 in a winner-to-state/loser-out 3A District 1 tournament game Saturday, Nov. 9, at Shoreline Stadium.

Despite the loss, Edmonds-Woodway coach Bill LeCompte said that the Warriors have a lot to be proud of this season.

"When you look at it and say we graduated half our roster last year and to be come back and be fighting for a state spot, be at the top of the league in a very difficult league, they accomplished quite a bit," he said.

Edmonds-Woodway started out strong in its 3A District 1 volleyball tournament opener.

The Warriors captured the first set against Ferndale, but then saw the Golden Eagles rebound to take the next three to prevail 17-25, 25-13, 25-16, 25-17 in the first-round match Tuesday, Nov. 12, at Edmonds-Woodway High School.

"There were a couple of points in a row we missed, a couple serves in a row," Edmonds-Woodway coach Nicole Bordeaux said. "(We) had a couple of bad passes and they kind of just grasped on to that lead and there they went."

King's coach Bart Foley said that the 2019 volleyball team will go down as one of the best, if not the best, in school history.

The Knights won the North Sound Conference title with a 10-0 record and finished the season 21-1 overall. King's went 14-0 during the regular season, winning 52 out of 56 sets. Heading into the 1A state finals, the Knights were 7-0 in the postseason and had won all seven matches by 3-0 scores.

King's went up against Chelan, the No. 1 ranked team in the state, and came within a point of a storybook ending in a classic five-set match.

King's had to dig deep.

Missing two key players who were out injured, the Knights fell behind 1-0 to Lakeside (Nine Mile Falls) but then rallied for two goals to pull out a 2-1 victory in the third/fourth place 1A state girls soccer tournament game Saturday, Nov. 23, at Shoreline Stadium.

The victory came less than 24 hours after King's lost a bruising 3-1 contest to eventual state champion Seattle Academy, who edged Cascade (Leavenworth) 1-0 in overtime in the title game. 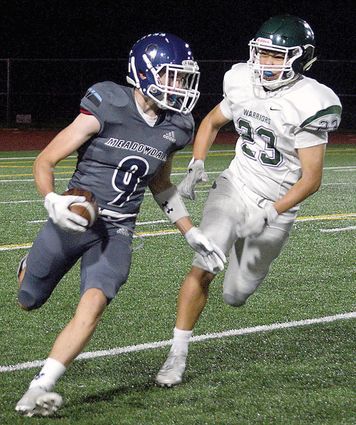 King's junior forward Olivia Gabelein scored what turned out to be the winning goal.

Edmonds-Woodway's Joe DeBella and Read Carr, Meadowdale's Alex Krueger and Mason Vaughn, and King's Casey Needham and Colin Hamilton were among the players eligible for scholarships totaling $18,000 that were awarded to six athletes.