Teacher: Colleagues are leaving for higher-paying jobs in high school 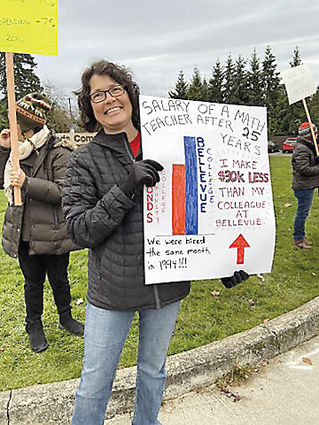 Faculty at Edmonds Community College have been gathering weekly at the school's entrance, clad in bright red shirts and hoisting signs protesting what they say are unfair wages.

Dec. 10 was the last picket of the year, but Karen Fenner, a full-time instructor at the Lynnwood college, said they will pick up in the new year.

"Other actions will likely be planned," she said, adding that mediation dates are rescheduled to begin in January.

"There was zero progress in last Wednesday's bargaining session. Although we presented a comprehensive compensation proposal, we received a collective 'no' to all of it. The EdCC administration decided not to renew the faculty contract in July. Instructors have been working without a contract since then, which is unprecedented in the history of labor relations at the college.

The college released the following statement Tuesday, Dec. 10: "Edmonds CC is currently in the midst of contract negotiations with the faculty union. We're hopeful there will be a successful outcome for both the faculty and the college soon. We cannot comment further as we are fully respecting and honoring the process and are committed to a fair negotiation."

"We are out here this morning for comparable and competitive faculty salaries," he said in a video of the protestors, distributed via e-mail around campus.

In the same video, faculty member and fellow protester Susanne Meslans said fair compensation of faculty at the college doesn't seem to be important.

"Faculty seems to be the lowest priority for the administration," she said. "When they want money for something they want, it's always there. For us, it's not a priority."

The union's contract with the college ended last July, and negotiations seem to have stalled over the issue of pay for faculty, but apparently not for leaders, according to protesters. The past decade has seen a 49% increase in administrative wages, they say.

During that same time, faculty salaries have increased by just 7%. And, in August, the EdCC board of trustees gave President Amit Singh a 3% cost-of-living raise, hiking his salary to more than $250,000 a year.

According to Fenner, community college faculty and staff in King County are getting a regional pay increase of 5% to account for the higher cost. This pay increase came after a study completed by the Center of Economic and Business Research at Western Washington University found King County faculty should be paid an additional $37,000 per year to account for the higher cost of living in the area.

"The cost of living in Edmonds is not significantly different from that of King County, and many of EdCC's faculty and staff live and do business in King County, so our salaries need to reflect this reality," Fenner said.

EdCC administration is offering a 1% pay increase, she said.

"With our current salary step system, the college will move faculty up one step on the pay scale for every three years worked," Fenner added. "This increase only amounts to about $350 per year. This makes it so faculty have to work for 39 years to reach the top of the pay scale. Associate faculty have to work for nine quarters to get any raise, and then 10 years to get a second raise. After 10 years, associate faculty cannot get another raise."

"In recent history, the college administration has been focusing on spending on a new building and adding and promoting administrators, not on faculty and students," said Fenner. "This status is unsustainable for teachers living in this area."

Portions of this story were reported by the staff at The Triton Review, Edmonds Community College's student newspaper.