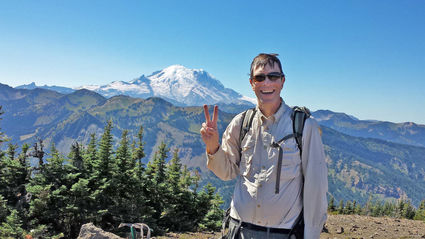 Steve was born was on May 3, 1955, in Seattle, Washington, the son of Donald and Victoria Fry. He graduated from Tyee High School in 1973. He then attended the University of Washington, graduating with a Bachelor of Science degree in Geology in 1977. He had a passion for the environment and mountains, which led to his career as an inspector for the Puget Sound Clean Air Agency for 35 years.

Steve married Karen Hudak on September 6, 1980, in Edmonds. They had three children: Eric, Stephanie, and John. Steve was a devoted father who always placed top priority on his family.

Steve loved the outdoors, hiking, and had a passion for collecting data on mountains and weather. He was well known for publishing articles on mountain heights, volume, and statistics. He also enjoyed photography, dancing, and music. He was a very active member of Edmonds Boyscout Troop 312 and a member of Holy Rosary Parish for 31 years.

Steve is remembered by his family and friends for his happy personality and strong desire for peace within his family and for the world. He could find joy in almost any situation and was loving and caring to all.

A funeral mass for Steve was held December 3, 2019, at Holy Rosary Parish, Edmonds. In lieu of flowers, donations can be made to Edmonds Food Bank or Snohomish County Volunteer Search and Rescue.